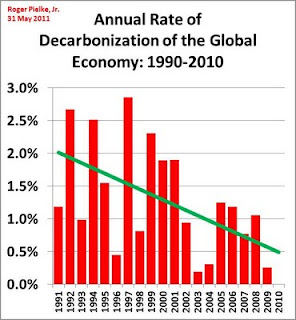 Last summer I noted a distinct trend since 1990 of a deceleration of the decarbonization of the global economy.  What does this mean in plain English?  It means that the the trend of emitting less carbon per unit of economic activity -- in place for much of the 20th century -- was slowing down.  This slow down was occurring despite intentions expressed in policies around the world to accelerate the trend, despite assumptions in virtually every major integrated assessment model that the trend would begin to accelerate even in the absence of such policies and despite the rapid deployment of renewable energy around the world.

New data has just been released which allows for an update of the data that I presented last summer through 2010, and the update can be seen in the graph above. The data shows that in 2010 the world saw the rate of change in its carbon dioxide emissions per unit of economic activity continue to decrease -- to zero.  (The data that I use are global GDP data from Angus Maddison extended using IMF global GDP growth rates and NEAA carbon dioxide data extended to 2010 using the 2010 growth rate released by the IEA yesterday).

The deceleration of the decarbonization of the global economy means that the world is moving away from stabilization of concentrations of carbon dioxide in the atmosphere, and despite the various reports issued and assertions made, there is no evidence to support claims to the contrary.  For more on why this is so, I recommend this book.
Posted by Roger Pielke, Jr. at 5/31/2011 08:02:00 AM
Email ThisBlogThis!Share to TwitterShare to FacebookShare to Pinterest
Newer Post Older Post Home