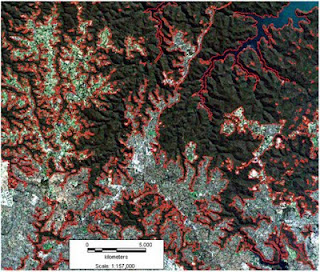 Earlier this year, I was a co-author on a paper in the AMS journal Weather, Climate and Society on trends in normalized property damage from Australia’s bushfires (the lead author is Ryan Crompton, who has led some outstanding work of late).  In that paper we concluded that:

[T]here is no discernable evidence that the normalized data are being influenced by climate change due to the emission of greenhouse gases.

Neville Nicholls has authored a response, and then in return, we have written a rejoinder.  This peer-reviewed exchange has just been published in Weather, Climate and Society. This post provides a concise summary of the exchange, and you can read the exchange plus the original paper here.
In his reply, Nicholls argues that our . . .

. . . normalization does not take into account several factors that may have led to a reduction in vulnerability over the period they examined.

His hypothesis is that our normalization has an unaccounted-for bias in it, which is a common initial reaction to normalization studies. We welcomed Nicholls’ commentary because it motivated us to perform some additional empirical work that ultimately added additional evidence in support of our original paper.
Nicholls’ first point is that our use of state-level data may mask an increasing trend of vulnerability-decreasing urbanization at the expense of rural development.  He provides uncited data to suggest that:

In 1958 about 45% of the population of the State of Victoria lived outside the capital city Melbourne. By 2008 this proportion had fallen to about 25%.

Our estimate of population distribution change is not as dramatic as that reported by Nicholls: according to the Australian Historical Population Statistics [available from the Australian Bureau of Statistics (ABS) online at http://www.abs.gov.au], the proportions of the population outside each of the capital cities of Victoria, New South Wales, and Tasmania in 1958 were 37%, 45%, and 68% and equivalent figures for 2007 (the latest year for which data were available) were 27%, 37%, and 58%.
If we adopt the ABS classification on urban and rural dwellings (the ABS defines urban areas to be those with 1000 or more people), the change of rate is even less pronounced over a similar timeframe: the proportions of rural dwellings in Victoria, New South Wales, and Tasmania in 1961 were 16%, 15%, and 33%, only slightly decreasing to 11%, 11%, and 29% in 2006 (dwelling data are contained in the census of population and housing and are available from the ABS). Note that these three states of southeast Australia account for over 90% of total normalized building damage.
Table 1 and Table 2 in our original paper provide evidence that the rate of growth of bushfire-prone structures in the regions affected by the 1983 Ash Wednesday and 2009 Black Sunday fires actually exceeded state-level growth.  To the extent that this is representative of a broader trend this would make our normalization conservative.

The figure from the top of this post can be found in our reply and has this description: "Aerial view of northern Sydney showing the highly dissected and complex interface (red line) between bushland (dark green) and urban areas."

A second point that Nicholls makes is to speculate that policy and homeowner actions might have lead to a nationwide reduction in structural vulnerability to fire. We reply that there is no need to speculate on this subject as the peer-reviewed literature on this subject suggests a different outcome -- specifically that vulnerability has in fact not decreased and the opposite may be the case (see our citations of Buxton et al. (2011), Chen and McAneney (2004) and Crompton et al. (2010)).

Nicholls’ third point is that that improved emergency preparedness may have led to a reduction in vulnerability.  Again, the evidence tells a different story.  For instance (and see our response for further discussion and examples):

As demonstrated in 2003 in Canberra and again in 2009 in Bendigo, Horsham, and Narre Warren (Whittaker et al. 2009), many whose homes were destroyed were unaware that they were at any risk from bushfires.

Nicholls’s final point is that improved fire weather forecasts may have led to a reduction in vulnerability.  Again, we respond by looking at the evidence:

[T]here is little evidence from anywhere that weather forecasts materially influence property damage from extreme events, even if they do save lives. The weather conditions on Black Saturday were very well forecast and accurate warnings were issued to emergency responders, politicians, and the public prior to February 7. What Black Saturday clearly demonstrated is the reverse: that despite accurate weather forecasts and significant emergency/bushfire planning and response, there is always the potential for large-scale life and property loss.

We conclude our response with the following:


Our result—that there is no discernable evidence that normalized building damage is being influenced by climate change due to the emission of greenhouse gases— is not surprising, when you consider that bushfire damage is not solely a function of bushfire weather; far from it, in fact. Even given a gradual aggravation of bushfire weather due to anthropogenic climate change or other factors, a bushfire still has to be ignited. Once ignited, a bushfire then has to traverse the landscape and impact a populated area, where outcomes in terms of damage will be a function of the spatial disposition of dwellings with respect to the fire front, and especially distance of properties from the bushland boundary (McAneney et al. 2009). These factors all contribute a large degree of stochasticity to eventual event loss outcomes.

The Nicholls (2011) speculations are worthy of discussion but no evidence is presented to support these contentions. Moreover, the evidence that we are aware of and have presented here in relation to a potential bias in our normalization methodology and to the possible sources of reduced vulnerability does not undermine our findings in any way.