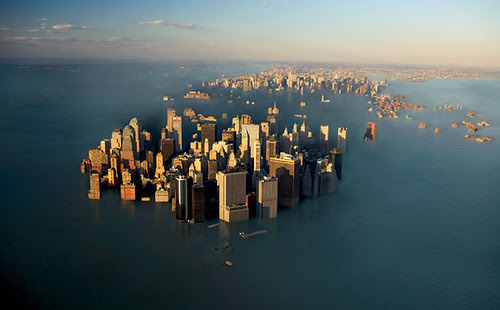 . . . Many colleagues of mine that I know are sincere seem to think Pielke is "reasonable." All I can say is that well meaning people thought that Joe McCarthy was 'reasonable' too. Those people weren't paying attention (or they rather un-American values). Now: read this post by Stefan (ippc-sealevel-gate/ in which he is unambiguously saying that IPCC is conservative (not alarmist), and then read RP Jr's post in which he miscontrues Stefan's post to mean that "another leading scientists says that IPCC is flawed." THERE is stealth advocacy for you. Look me in the eye and tell me you think Piekle is being "reasonable" here. (Note: I grant you that it is possible that Pielke may just be too stupid to have understood what Stefan wrote. But I doubt that. --eric

Real Climate contributor Stefan Rahmstorf has written an interesting post criticizing about the IPCC's handling of the issue of sea level rise in the IPCC AR4 WG I report:

In its latest report, the IPCC has predicted up to 59 cm of sea level rise by the end of this century. But realclimate soon revealed a few problems.

First, although the temperature scenarios of IPCC project a maximum warming of 6.4 ºC (Table SPM3), the upper limit of sea level rise has been computed for a warming of only 5.2 ºC – which reduced the estimate by about 15 cm. Second, the IPCC chose to compute sea level rise up to the year 2095 rather than 2100 – just to cut off another 5 cm. Worse, the IPCC report shows that over the past 40 years, sea level has in fact risen 50% more than predicted by its models – yet these same models are used uncorrected to predict the future! And finally, the future projections assume that the Antarctic ice sheet gains mass, thus lowering sea level, rather at odds with past ice sheet behaviour.**

Some scientists within IPCC warned early that all this could lead to a credibility problem, but the IPCC decided to go ahead anyway.

Nobody cared about this.

Rahmstorf explains that he sees this error as being worse than the 2035 glacier error (emphasis added):

Why do I find this IPCC problem far worse than the Himalaya error? Because it is not a slip-up by a Working Group 2 author who failed to properly follow procedures and cited an unreliable source. Rather, this is the result of intensive deliberations by Working Group 1 climate experts. Unlike the Himalaya mistake, this is one of the central predictions of IPCC, prominently discussed in the Summary for Policy Makers. What went wrong in this case needs to be carefully looked at when considering future improvements to the IPCC process.

A few weeks ago Robert Watson, former director of the IPCC, suggested that some might ask a question about the issues raised in the IPCC:

Some would say that only four mistakes or imprecise wording have been found in the 1,000-page Working Group II report, and none in working groups I and III, and so would ask: Is there really a problem?

After Richard Tol's guest posts here over the past two weeks (more to come next week) on issues in WG III and now an IPCC contributor taking the IPCC AR4 WG I to task, I don't think that the hypothetical "some" would continue to be asking whether there really is a problem.
Posted by Roger Pielke, Jr. at 3/12/2010 02:24:00 PM
Email ThisBlogThis!Share to TwitterShare to FacebookShare to Pinterest
Newer Post Older Post Home