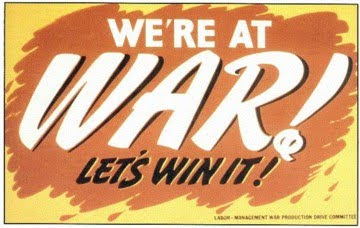 Matt Nisbet, a communications scholar at American University, has a thoughtful and hard-hitting essay at Slate arguing that climate scientists need to step back from a war footing, because they are waging a battle for public opinion that they've already won. The most likely casualty of continued open warfare on climate skeptics will be science itself.

Here is an excerpt:

If communication researchers have trouble establishing clear evidence of a significant impact for Climategate, what explains the apparent overreaction by scientists and their bunker mentality? Past research shows that individuals more heavily involved on an issue, such as climate scientists, often tend to view even objectively favorable media coverage as hostile to their goals. They also have a tendency to presume exaggerated effects for a message on the public and will take action based on this presumed influence. The call to arms that "science is getting creamed" and that there is a need for an "aggressively partisan approach" are examples of how these common miscalculations about the media have colored the outlook of climate scientists.

Scientists are also susceptible to the biases of their own political ideology, which surveys show leans heavily liberal. Ideology shapes how scientists evaluate policy options as well as their interpretations of who or what is to blame for policy failures. Given a liberal outlook and strong environmental values, it must be difficult for scientists to understand why so many Americans have reservations about complex policies that impose costs on consumers without offering clearly defined benefits. Compounding matters, scientists, like the rest of us, tend to gravitate toward like-minded sources in the media. Given their background, they focus on screeds from liberal commentators which reinforce a false sense of a "war" against the scientific community.

The scientists seem to believe they can prevail by explaining the basis of climate change in clearer terms, while asserting the partisan motives of "climate deniers." This has been the strategy since the early days of the Bush administration, yet for many members of the public, a decade of claims about the "war on science" are likely ignored as just more elite rancor, reflecting an endless cycle of technical disputes and tit-for-tat name calling. What are needed are strategies that transcend the ideological divide, rather than strengthen it.

I differ a bit from Nisbet in his prescription -- he thinks scientists should work to engage the public and opinion leaders. In contrast, I think scientists need to demonstrate leadership by helping to open up space for a wide-ranging discussion of policy options among specialists, rather than enabling a small clique of activists to try to shut down any such discussion in the name of science.

These views are not mutually exclusive, of course. However, any public engagement is futile from a policy perspective without viable policy options on the table. And tight now climate policy lacks viable options.

Nisbet is one the mark when he concludes:

By getting out of the lab and away from their echo chamber of like-minded views about climate politics, researchers would learn how other people view climate change, and what should and can be done about it.