The fallout from the IPCC Himalayan glacier situation gets stranger and stranger. Now an IPCC lead author has stepped forward claiming that the error has been known by the IPCC all along. From Agence France-Presse:

A top scientist said Monday he had warned in 2006 that a prediction of catastrophic loss of Himalayan glaciers, published months later by the UN's Nobel-winning climate panel, was badly wrong.

The Intergovernmental Panel on Climate Change (IPCC) report said in 2007 it was "very likely" that the glaciers, which supply water to more than a billion people across Asia, would vanish by 2035 if global warming trends continued.

"This number is not just a little bit wrong, but far out of any order of magnitude," said Georg Kaser, an expert in tropical glaciology at the University of Innsbruck in Austria.

"It is so wrong that it is not even worth discussing," he told AFP in an interview.

It gets more interesting:

Kaser suggested the initial error originated from a misreading of a

1996 Russian study or from findings on a handful of glaciers that were mistakenly extended to apply to the whole region.

In either case, he suggested, the fact that it found its way into the report underpinning global climate negotiations signalled the need for a reform of the way the IPCC collects and reviews data.

"The review community has entirely failed" in this instance, he said.

Kaser was a lead author in Working Group I of the IPCC report, which dealt with the physical science of climate change.

Its conclusions -- that climate change is "unequivocal" and poses a major threat -- remain beyond reproach, he said.

The prediction for the Himalayan glaciers was contained in the separately published Working Group II report, which assessed likely impacts of climate change.

More specifically, the chapter focussed on an assessment of Asia, authored by scientists from the region.

"This is a source of a lot of misunderstandings, misconceptions or failures," Kaser said, noting that some regions lacked a broad spectrum of expertise.

"It is a kind of amateurism from the regional chapter lead authors. They may have been good hydrologists or botanists, but they were without any knowledge in glaciology."

Kaser said some of the scientists from other regional groups took heed of suggestions, and made corrections ahead of final publication in April 2007.

But the Asia group did not. "I pointed it out," he said of the implausible prediction on the glaciers.

"For a reason I do not know, they did not react."

But blame did not rest with the regional scientists alone, Kaser added.

"I went back through the comments afterward, and not a single glaciologist had any interest in looking into Working Group II," he said.

And there is more:

The IPCC's Fifth Assessment, scheduled for release in 2013, will probably be adjusted to avoid such problems, said Kaser.

"If it had not been the focus of so much public opinion, we would have said 'we will do better next time.' It is clear now that Working Group II has to be restructured," he said.

The implications of Kaser's comments are not good for the IPCC, however that they are interpreted.

Given Rajendra Pachauri's vigorous defense of the claims made by the IPCC about Himalayan glacier melt, Dr. Kaser's comment that -- "All the responsible people are aware of this weakness in the Fourth Assessment. All are aware of the mistakes made" -- raises an eyebrow. It must be the case that Dr. Pachauri either knew of the error or he did not. Neither state of affairs is good for the IPCC.

Consider a further implication: If indeed "all the responsible people are aware" of the mistakes in the IPCC, then what in the world explains their complete silence over the past few years while headlines like the following were being announced to the world? 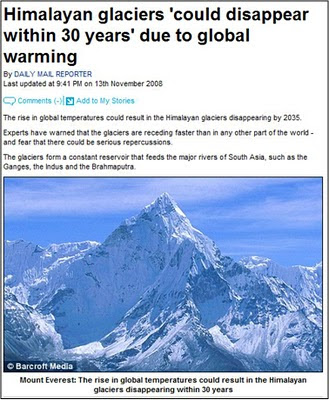 Think about this statement:

"If it had not been the focus of so much public opinion, we would have said 'we will do better next time.'"

Is it really the case that IPCC scientists would have continued to sit on a known error with important policy implications in complete silence until their hand was forced by the focus of public opinion? Really?!

I wonder what other known errors are being sat on?
Posted by Roger Pielke, Jr. at 1/18/2010 09:19:00 PM
Email ThisBlogThis!Share to TwitterShare to FacebookShare to Pinterest
Newer Post Older Post Home