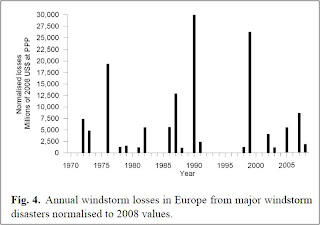 The image above is from a paper published yesterday by J. L. Barredo titled: "No upward trend in normalised windstorm losses in Europe: 1970–2008" in the open access journal Natural Hazards and Earth System Sciences. You can glean from the title the message of the paper. Here is an excerpt from the introduction:

There is now clear evidence that societal changes and economic development are the main factors responsible for increasing losses from natural disasters in many jurisdictions. This has been shown to be the case for flood and hurricane losses in the US (Pielke Jr. and Landsea, 1998; Pielke Jr. and Downton, 2000; Pielke Jr. et al., 2008), tornadoes in the US (Brooks and Doswell, 2001), hurricane losses in the Caribbean region (Pielke Jr. et al., 2003), weather extremes in the US (Changnon et al., 2000; Changnon, 2003), flood losses in Europe (Barredo, 2009), tropical cyclones in India (Raghavan and Rajesh, 2003), and weather-driven disasters in Australia (Crompton and McAneney, 2008). All of these studies found no significant trends of losses after historical events were normalised to current conditions in order to account for demonstrably changing societal/demographic factors.

To conclude, despite the changes on European storminess the evidence for an anthropogenic contribution to storm trends remains uncertain (Hegerl et al., 2007) and there is no evidence of an impact of anthropogenic climate change on the normalised windstorm losses.

These findings echo those of Barredo on European floods. Once again, we find that studies of disasters around the world are unambiguous and uncontested: Increasing damage over recent decades can be explained entirely by societal factors and there is no evidence to support the hypothesis that greenhouse-gas driven climate change has led to increasing disasters. The standard disclaimer applies -- this does not mean that action to address accumulating greenhouse gases does not make sense; as I've stated on many occasions, it does. What it does mean is that efforts to point to contemporary disasters as a basis for action on energy policies are misleading at best.
Posted by Roger Pielke, Jr. at 1/16/2010 09:29:00 AM
Email ThisBlogThis!Share to TwitterShare to FacebookShare to Pinterest
Newer Post Older Post Home