Chris Mooney has a commentary up at The Huffington Post that is full of information that is just wrong. First, he gets budget figures wrong by a factor of about 50:

. . . Sputnik. The first Earth-orbiting satellite, beeping at us from above, inspired stark competitive fears in the nation: Were we falling behind in technology? Would the Soviets fire on us from the skies, and if they tried, could we stop them?

In response, the U.S. Congress jacked up the budget of the recently formed National Science Foundation to $134 million, an increase of nearly $100 million in just one year. And that was just the beginning -- NSF's budget continued to explode in subsequent years, so that by 1962-1963 it had reached $12.2 billion.

Mooney then complains that:

In sum, the policies and cultural changes unleashed in the wake of Sputnik shaped the course of American science for decades -- and made us world leaders. But then, something went very wrong. Science budgets stopped rising and began to fall. 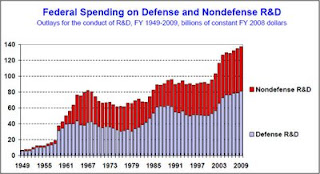 The wind-down of NASA funding was the reason for the peak in the 1960s. Budgets declined until 1975 when they began a long and sustained period of increase, accelerated most dramatically under the presidency of none other than George W. Bush. Before anyone gets too excited about this data, it is important to recognize that R&D spending has essentially tracked overall government spending since the late 1960s. As government spending has gone up, so too has R&D spending. Policy makers have displayed a remarkable consistency in strong support for science over almost a half century (see figure below from AAAS and this PDF). Mooney's assertion that budgets have been falling is not supported by the evidence. 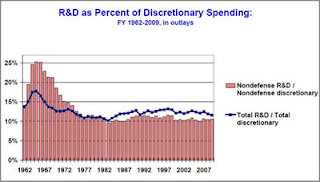 Mooney advances an argument suggesting that science has fallen in stature from a golden age:

More broadly, our culture changed vastly since the mid-twentieth century. Science became much less cool, scientists ceased to be role models, and kids aren't rushing home anymore to fire rockets from their backyards.

This also is simply not supported by evidence. The 2008 NSF Science and Engineering Indicators presented data on public attitudes about science, and not only is science perceived to be cool, it always has been. Here is what NSF reports:

Public confidence in the leaders of the scientific community is one indicator of public willingness to rely on science. At a minimum, such confidence is ordinarily a prerequisite for taking scientific knowledge seriously in personal and public matters.

Throughout the entire period in which this question has been asked, the percentage of Americans expressing a great deal of confidence in the leaders of the scientific community has fluctuated within a relatively narrow range, hovering between 35% and 45% In contrast, for some other institutions, confidence has been more sensitive to current events: the percentage of Americans professing a great deal of confidence in military leaders changed more between 2004 and 2006 than the comparable percentage for science leaders changed between 1973 and 2006.

Mooney's essay is full of incorrect information and flawed assertions. Is he waging a war on science policy?
Posted by Roger Pielke, Jr. at 7/21/2009 02:02:00 PM
Email ThisBlogThis!Share to TwitterShare to FacebookShare to Pinterest
Newer Post Older Post Home