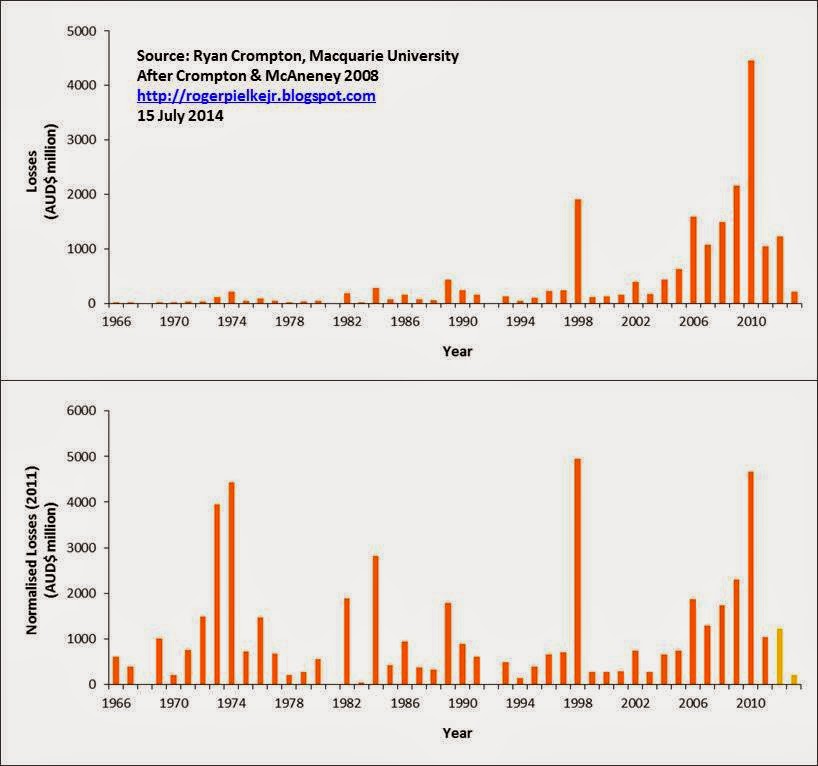 The graph above is the most recent update of the normalized disaster loss database for Australia, sent to me by Ryan Crompton of Risk Frontiers at Macquarie University. Ryan also sends this explanatory text:


Crompton and McAneney (2008) normalised Australian weather-related insured losses over the period 1967-2006 to 2006 values. Their methodology adjusted for changes in dwelling numbers and values (excluding land value) and in a marked point of departure from previous normalisation studies, they applied an additional adjustment for tropical cyclone losses to account for improvements in construction standards mandated for new construction in tropical cyclone-prone parts of the country. These were introduced around the early 1980s following lessons learnt from the destruction of Darwin by Tropical Cyclone Tracy in 1974 (Mason et al. 2013).

Crompton and McAneney (2008) emphasise the success of improved building standards in reducing building vulnerability and thus tropical cyclone wind-induced losses. Figures 1a and b show the annual aggregate losses and the annual aggregate normalised losses (2011/12 values) for weather-related disasters. These figures are updated from Crompton and McAneney (2008) using a refined methodology described in Crompton (2011).

Note that the 2012 and 2013 values (shown in yellow in the bottom graph) have not been normalized back to 2011/2012 values. They are shown as reported. Once normalized they will be a bit lower, so as presented they overestimate them 2012 and 2013 losses, but not by a large amount.
Posted by Roger Pielke, Jr. at 7/15/2014 09:49:00 AM
Email ThisBlogThis!Share to TwitterShare to FacebookShare to Pinterest
Newer Post Older Post Home