A Policy Practitioner Deconstructs the Science Integrity Guidelines- The President’s Memo, I. 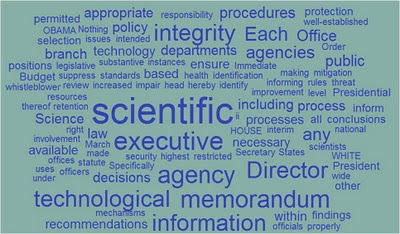 [THIS IS A GUEST POST FROM A REAL LIVE US GOVERNMENT SCIENTIST, SHARON FRIEDMAN. HER VIEWS EXPRESSED HERE ARE HER OWN. SHARON BLOGS AT A NEW CENTURY OF FOREST PLANNING. NOTE: THE WORD CLOUD ABOVE IS OF THE PRESIDENT'S MARCH, 2009 MEMO, WHICH IS DISCUSSED IN THIS POST.]

As Maria said in the Sound of Music, “let’s start at the very beginning, it’s a very good place to start”. In order to talk about the Guidelines, let’s first deconstruct the President’s memo- sentence by sentence, equipped with a handy online dictionary. I have an earnest belief that unclear concepts cannot constitute a firm foundation for sound public policy.


(1) Science and the scientific process must inform and guide decisions of my Administration on a wide range of issues, including improvement of public health, protection of the environment, increased efficiency in the use of energy and other resources, mitigation of the threat of climate change, and protection of national security.

I would argue that the words “and guide” decisions of my Administration strays a bit from what we currently think the role of science and policy should be.


1. to act as a guide to : direct in a way or course
2a : to direct, supervise, or influence usually to a particular end
b : to superintend the training or instruction of

So if we take this sentence literally, the authors are using a word usually defined as including the concept of direction; even “to a particular end.”

Sarewitz describes some of the problems with this concept in his Issues piece here.


(2) The public must be able to trust the science and scientific process informing public policy decisions.

This is a laudable goal, but the fact (as described in my Conveyor Belt post here) is that the people involved in developing policy do not have a voice in framing the research questions, for the most part. And putting together the research snippets developed to inform policy decisions is not, in and of itself, science. Then there is the absence of QA/QC in many research projects putatively designed to inform policy. Finally, if we really cared about peer review for research important to policy, we would monitor who does the reviews, pay people to do it, and make public the review comments and replies.


(3) Political officials should not suppress or alter scientific or technological findings and conclusions.

Hopefully, non-political officials wouldn’t do this either. However, I think this might be a potential minefield – is not doing what the professional wants “suppressing the findings” or just disagreeing with how they should be used in informing policy?


(4) If scientific and technological information is developed and used by the Federal Government, it should ordinarily be made available to the public.

Good on that. I would also say that their papers in journals should be available for free to taxpayers.


(5) To the extent permitted by law, there should be transparency in the preparation, identification, and use of scientific and technological information in policymaking.

This seems generally like a good idea. In my agency, we have been required to document how we use “the best available science” for certain decisions, and it seems to work fairly well.


(6) The selection of scientists and technology professionals for positions in the executive branch should be based on their scientific and technological knowledge, credentials, experience, and integrity.

This seems pretty straightforward- except I’m not sure that we have ever considered “integrity” as a selection criterion and it seems a bit out of place interjected here; especially since the “integrity” idea seemed originally to be about political employees not listening to scientists. I also wonder how the Office of Personnel Management would feel about “integrity” and the merit promotion concept. Let’s turn to the Merriam-Webster definition:


Definition of INTEGRITY
1: firm adherence to a code of especially moral or artistic VALUES : INCORRUPTIBILITY
2: an unimpaired condition : SOUNDNESS
3: the QUALITY or state of being complete or undivided : COMPLETENESS

I guess I’m kind of lost here.. hopefully it would be good to have all employees exhibit integrity- but which moral values? How would you measure them? If you are going to call a reference and ask them about someone’s “integrity”, it seems to me that you should have a good idea exactly what you mean. Otherwise, you could get colorful stories about their activities following imbibing of certain beverages.

I turned to Wikipedia here and my neurons just about experienced meltdown. When scientist terminology meets philosophy terminology there’s always a high potential for generalized fuzziness.
What is the difference between general old integrity and “scientific” integrity? And if politicals ignoring the “science” are the problem, why are we going after the science and technology professionals?

We may see in the next post, where we move on to the principles articulated in the President’s memo.
Posted by Roger Pielke, Jr. at 12/20/2010 08:21:00 AM
Email ThisBlogThis!Share to TwitterShare to FacebookShare to Pinterest
Newer Post Older Post Home