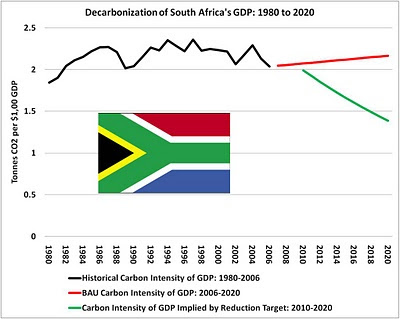 The image above comes from a post of mine earlier this year on efforts to decarbonize the South African economy. This week has seen debate in the United States over whether the Obama Administration should support World Bank financing for a new coal plant in South Africa.

According to ClimateWire, here is the result:

The loan decision is among the most controversial in recent history, and environmental activists have leaned hard on the Obama administration to oppose it. They argue the United States must stand behind a recent guideline discouraging U.S. board members of multilateral banks from approving coal plant loans because of the impacts of climate change. The 4,800-megawatt Medupi power plant would emit 25 million tons of carbon dioxide into the atmosphere.

Yet South Africa also has been leaning hard on the administration and Congress, arguing the loan to the country's state-owned utility Eskom Holdings Ltd. is critical to the national economy. The power plant is South Africa's first in more than 15 years.

The ClimateWire story gets right to the nub of the issue (emphasis added):

The United States has been caught in a difficult spot throughout the vote controversy. Environmental groups say the United States should act as a leader on climate change by voting against the loan. Yet if the United States opposes the loan package, it will face criticism from developing countries that it is trying to reduce global emissions on the backs of the world's poor.

The South African government, which requested the loan, maintains that the plant is critical to the expansion of the country's economy. Meanwhile, they note that it will be the first to use cleaner "supercritical" technology, and $750 million will go toward a variety of related clean energy projects.

Lawmakers in Congress are split over the project. Rep. Gregory Meeks (D-N.Y.) and other African-American lawmakers have called on the Treasury Department to support the loan, citing South Africa's need to develop. Sens. Patrick Leahy (D-Vt.) and John Kerry (D-Mass.) along with Rep. Barney Frank (D-Mass.) sent a separate letter to World Bank President Robert Zoellick that did not oppose the loan but cited "serious concerns" and called for specific new plans to ramp up clean-energy portfolios in South Africa and elsewhere. Zoellick responded within days with a five-page letter defending the plant.

World Bank leaders note that coal makes up less than 3 percent of the institution's lending, but maintain that South Africa and other developing countries deserve to increase energy access. To do that, they argue, countries like South Africa must be able to use the cheapest and most abundant fuel source: coal.

When GDP growth comes into conflict with emissions reduction goals, it is not going to be growth that is scaled back. Further, when rich countries wanting emissions reductions run into poorer countries wanting energy, it is not going to be rich countries who get their way. When energy access depends upon cheap energy, arguments to increase energy costs or deny energy access are not going to be very compelling. The South African coal plant decision well illustrates many of the political boundary conditions that shape climate policy. Policy design will have to accommodate these conditions, rather than ignore them or think that they will somehow go away.