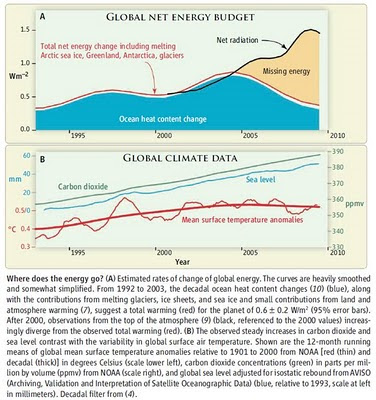 Last week Science magazine gave Trenberth a chance to explain what he meant by this comment, which has been much discussed in the aftermath of the released emails (the image above is from that article). In that article, Trenberth, and Kevin Fasullo, write:

Over the past 50 years, the oceans have absorbed ~90% of the energy added to the climate system; the rest has gone into melting sea and land ice and heating the land surface and atmosphere ( 4). CO2 concentrations have further increased since 2003, and even more heat should have accumulated at a faster rate since then. Where has this energy gone (see the figure)?

. . . Since 2004, ~3000 Argo floats have provided regular temperature soundings of the upper 2000 m of the ocean, giving new confidence in the ocean heat content assessment—yet, ocean temperature measurements from 2004 to 2008 suggest a substantial slowing of the increase in global ocean heat content (see the figure, panel A) ( 10). If the extra energy has not gone into the ocean, where has it gone?

The open admission that scientists don't understand the location of the missing heat is a vindication for my father, who has been discussing this issue since 2006, and taking a lot of grief for it. For instance, in 2006 my father noted that model predictions and observations of the accumulation of heat in the oceans were diverging:

The mismatch between the data and the model predictions, however, raises serious questions on the ability of the multi-decadal global climate models to accurately predict even the global average variability and long term trend of the radiative imbalance of the climate system.

In 2008, the ever-astute Richard Harris of NPR was one of the very few picked up on this issue:

But if the aquatic robots are actually telling the right story, that raises a new question: Where is the extra heat all going?

Kevin Trenberth at the National Center for Atmospheric Research says it's probably going back out into space. The Earth has a number of natural thermostats, including clouds, which can either trap heat and turn up the temperature, or reflect sunlight and help cool the planet.

That can't be directly measured at the moment, however.

"Unfortunately, we don't have adequate tracking of clouds to determine exactly what role they've been playing during this period," Trenberth says.

It's also possible that some of the heat has gone even deeper into the ocean, he says. Or it's possible that scientists need to correct for some other feature of the planet they don't know about. It's an exciting time, though, with all this new data about global sea temperature, sea level and other features of climate.

My father explained why this matters, presenting a rather uncomfortable perspective:

The observed absence of heat accumulation (of Joules) in the upper ocean (and in the troposphere) for the last four years means that there has been NO global warming in these climate metrics during this time period. It is unknown whether this is a short term aberration but, regardless, it is clear that the IPCC models have failed to skillfully predict this absence of warming.

You can read an interesting exchange from earlier this week among Roger Pielke, Sr., Kevin Trenberth and Josh Willis on my father's blog here.

What to take from this?

First, there was ample indication of issues associated with the divergence of model projections and accumulated heat years ago, but for whatever reasons, it was not openly discussed, with the exception of the 2008 NPR story (perhaps I've missed others).

Second, it took the released CRU emails to open up a public scientific dialogue on this subject, which suggests that there are some issues with either model projections or observations. Judging from the Pielke-Trenberth-Willis exchange, I'd put my money on problems with the models.

Third, none of this should alter how we think about the policy issues, as uncertainties have always been with us and always will. But getting uncertainties out in the open is a new thing for the public face of climate science and undoubtedly some will likely try to reassert the old ways of suppressing uncertainties.

The story of the missing heat does not indicate that climate science is a fraud or that we need not worry about a human influence on the climate system. What it does tell us is that there have been some unhealthy goings on in the climate community and we should all bask in the new found sunshine.

So where is the missing heat? Apparently no one knows, but I hope they find it soon.
Posted by Roger Pielke, Jr. at 4/19/2010 09:13:00 PM
Email ThisBlogThis!Share to TwitterShare to FacebookShare to Pinterest
Newer Post Older Post Home