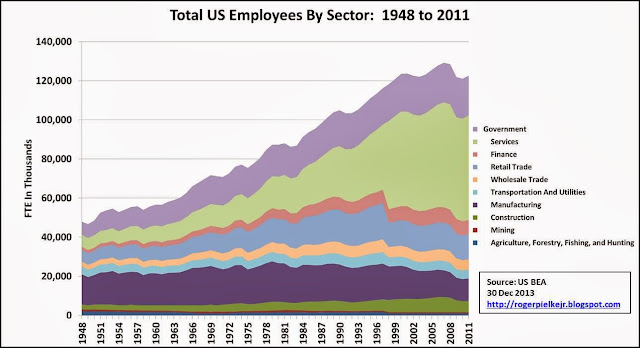 The figure above shows data on employment in the US economy 1948 to 2011 across 10 sectors. The data comes from the Bureau of Economic Analysis. There is a discontinuity in the data in 1998, when category definitions were changed. and we have not tried to standardize across that discontinuity. In addition, the graph shows "full time equivalents" rather than the frequently used full- and part-time employment series.

The figure below shows how the overall rate of job growth has changed over time. It shows the trailing 10-year annual growth rates in FTE jobs. 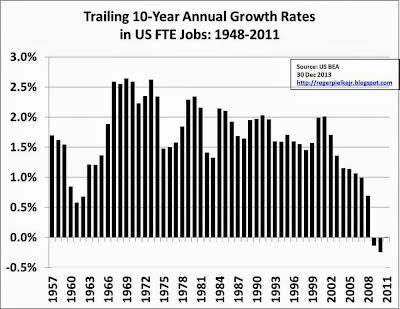 The graph below shows the same data in percentage terms. 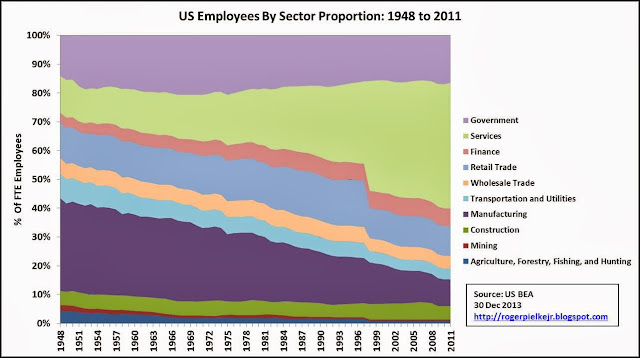 
Behind these numbers are some interesting dynamics. While manufacturing has shrunk dramatically as a proportion of all jobs, since 1950 the US has only seen a decrease of 3.7 million manufacturing jobs. Over that same period the US has added 47.1 million service jobs. Government has remained remarkably stable as a proportion of jobs, but has added 13.8 million jobs since 1950, but most of those were added before 1970.

Here is an interesting thought experiment:


What could the US government do with 3 million more employees?  Oh, I'm sure we could think of something.
Posted by Roger Pielke, Jr. at 12/30/2013 03:58:00 PM
Email ThisBlogThis!Share to TwitterShare to FacebookShare to Pinterest
Newer Post Older Post Home