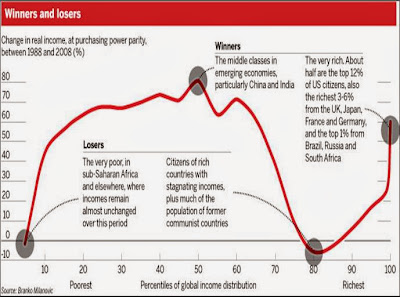 
[T]he rise of China and India – two poor but populous countries – has made global inequality (measured by the disparity in individual incomes, regardless of where people live) less pronounced. The world’s Gini index of inequality fell between 2002 and 2008 – perhaps for the first time since the Industrial Revolution – and the growth of Indonesia and Brazil is pushing in the same direction.

“China is like a sumo wrestler who is fighting against global inequality,” says Branko Milanovic, lead economist at the World Bank. “He is standing up against all the rest of the forces, but he is a big guy. Now, India has become a second sumo wrestler.”

Those changes are seen in Chart 1 [above], which shows that two groups in the world did well between 1988 and 2008, achieving the highest real increases in their income.

The first was the rich – the top 10 per cent of earners and, within that, the 1 per cent. The other gainers were in the mid-tier – workers in emerging economies who were moving out of poverty.

The two groups that did worst were the very poor – those in the bottom 5 per cent, in sub-Saharan Africa and elsewhere, and the western middle classes, both in the US and western Europe and former Eastern Bloc countries. Their income rises did not match the luckier groups and, at the 75th percentile – including the US middle class – stagnated and even fell.

The figure above comes from a fascinating and provocative paper by Branko Milanovic (2012) of the World Bank ("Global Income Inequality by the Numbers: in History and Now" here in PDF). Milanovic concludes:


There are rich countries that have accumulated lots of wealth, and transmit  that wealth, along with many other advantages, to the next generations of their citizens. This is why, for example, the poorest Americans are relatively well-off by world standards. They are lucky to have been born in the country that is rich (or has become rich; the case was different with the poorest Americans in the 17th century). And there are also people from poor countries who do not have wealth, and advantages and opportunities it confers. But—and this is in stark difference to the within-country case —this is considered unobjectionable, or rather it is not questioned whether one may keep on benefiting from something that the previous generations have created, and she has simply inherited by virtue of birth. In one case, we frown upon the transmission of family-acquired wealth to offsprings if two different individuals belong to the same nation. In the other case, we take it as normal that there is a transmission of collectively acquired wealth over generations within the same nation, and if two individuals belong to two different nations, we do not even think, much less question, such acquired differences in wealth, income and global social position.

If citizenship explains 50 percent or more of variability in global incomes, then there are three ways in which global inequality can be reduced. Global inequality may be reduced by high growth rates of poor countries. This requires an acceleration of income growth of poor countries, and of course continued high rates of growth of India, China, Indonesia, etc. The second way is to introduce global redistributive schemes although it is very difficult to see how that could happen. Currently, development assistance is a little over 100 billion a year. This is just five times more than the bonus Goldman Sachs paid itself during one crisis year. So we are not really talking about very much money that the rich countries are willing to spend to help poor countries. But the willingness to help poor countries is now, with the ongoing economic crisis in the West, probably reaching its nadir. The third way in which global inequality and poverty can be reduced is through migration. Migration is likely to become one of the key problems—or solutions, depending on one’s viewpoint— of the 21st century. To give just one stark example: if you classify countries, by their GDP per capita level, into four “worlds”, going from the rich world of advanced nations, with GDPs per capita of over $20,000 per year, to the poorest, fourth, world with incomes under $1,000 per year, there are 7 points in the world where rich and poor countries are geographically closest to each other, whether it is because they share a border, or because the sea distance between them is minimal. You would not be surprised to find out that all these 7 points have mines, boat patrols, walls and fences to prevent free movement of people. The rich world is fencing itself in, or fencing others out. But the pressures of migration are remaining strong, despite the current crisis, simply because the differences in income levels are so huge.

I conclude with something that resembles a slogan: either poor countries will become richer, or poor people will move to rich countries. Actually, these two developments can be seen as equivalent. Development is about people: either poor people have ways to become richer where they are now, or they can become rich by moving somewhere else. Looked from above, there is no real difference between the two options. From the point of view of real politics, there is a whole world of difference though.

Some perspective on where the world may be heading be found in the following figure, which shows an estimate of global income distribution from 1820 to 2000 (Luiten van Zanden et al. 2011,"The Changing Shape of Global Inequality 1820-2000: Exploring a new dataset," here in PDF). 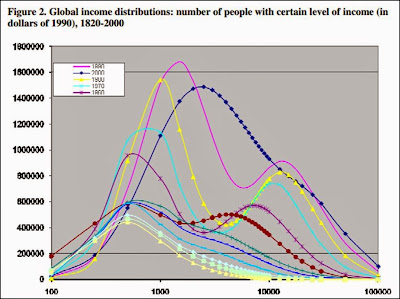 That figure shows both accumulating wealth and greater global equality (and some readers may recognize it as a version of a similar figure which appears in The Climate Fix). Luiten van Zanden and colleagues conclude:


Our most striking results point to important changes in the structure of global inequality. It was a clear unimodal distribution in the 19th century, but it became increasingly bi-modal during the middle decades of the 20th century, when a clear separation between ‘rich’ and ‘poor’ peaks in the global income distribution emerged. This is a striking result, because at the same time, as we saw, the share of the very poor fell rapidly during this period, both in absolute terms and as a share of the world population. Between 1980 and 2000, the shape of the global distribution changed ‘suddenly’ from a bi-modal to a unimodal distribution, mainly due to the rapid growth in countries such as China, India and Indonesia. Our speculation that these changes in the global income distribution were linked to processes of globalization and de-globalization in the world economy, clearly require further explanation. The globalized world of the (late) nineteenth century produced a unimodal distribution. Processes of de-globalization in the middle decades of the twentieth century had two effects on global inequality: nation states acquired the freedom to build a welfare state that sharply reduced income inequality within countries (in the richer part of the world), but at the same time it seems to have lead to the emergence of a bi-model distribution on a global scale. The dramatic process of globalization of the final decades of the 20th century reversed both changes: it led to a strong increase in within country inequality (bringing it back to its level from before the ‘egalitarian revolution’ of the twentieth century), and it resulted in the sudden appearance of a unimodal income distribution on a global scale (and a small decline in between country inequality).

From this perspective, an important question is how then to balance within-country inequality with global inequality, if indeed, as the FT argues:


The forces producing the dispersion of income and wealth in western countries are hard to reverse. They are also the forces that have helped the emerging middle class of China, India or Brazil.

Implicated are not just policies on growth and (re)distribution, but as Milanovic notes, immigration and globalization.

Expect more discussion of these themes on this blog in 2014.
Posted by Roger Pielke, Jr. at 12/24/2013 08:35:00 AM
Email ThisBlogThis!Share to TwitterShare to FacebookShare to Pinterest
Newer Post Older Post Home