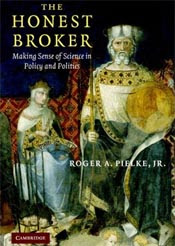 Not long ago I mentioned on this blog I that I had set to work on an 2nd edition of The Honest Broker, my 2007 book with Cambridge University Press After a lot of work and thought I've decided at this point not to press forward with it, for two reasons.

One is that after going through the first five chapters I made a few revisions, but mostly very small and very nuanced. I actually really like these chapters as they are. The second is that getting into further details on each of the four ideal types (well, five) means ... getting into the details.  I have a lot of interesting material on science advisory processes, but it is wonky and technical. These issues are important, and I will be writing on them, but first in the academic literature. One of the things that people seem to like about THB is that it is short and accessible. So I am taking the approach that if it is not broken, don't fix it.

Will the be a THB2? Probably down the road, but more likely as a sequel than as a second edition. So readers are stuck with The Skeptical Environmentalist and the Iraq war as the major case studies. For today's students that is ancient history. Fortunately, new cases arise where science meets politics almost daily.

Thanks to all the readers and colleagues who wrote in with comments and advice!
Posted by Roger Pielke, Jr. at 11/18/2013 09:43:00 AM
Email ThisBlogThis!Share to TwitterShare to FacebookShare to Pinterest
Newer Post Older Post Home