Access to energy is one of the big global issues that has hovered around the fringes of international policy discussions such as the Millennium Development Goals or climate policy, but which has been getting more attention in recent years. In my frequent lectures on climate policy I point out to people that 1.3 billion people worldwide lack any access to electricity and an 2.6 billion more cook with wood, charcoal, tree leaves, crop residues and animal waste (an additional 400 million cook with coal).

The "success" scenarios of climate advocates hoping to power the world with carbon-free energy almost always leave a billion or more people in the dark and several billion cooking with dirty fuels. Sometimes, magic is invoked to suggest that "electricity can be brought to everyone" without appreciably increasing carbon emissions. Of course, if we could bring electricity to the 1.3 billion without any access with no effect on emissions, then we could probably do it for 6 billion others.

There is a devil in the details which helps us to keep the energy poor out of view while we debate issues important to rich people, like climate change. That is the very definition of "energy access." The International Energy Agency explains some of the difficulties in defining energy access and gives its definition as follows:


There is no single internationally-accepted and internationally-adopted definition of modern energy access. For our energy access projections to 2030, the World Energy Outlook (WEO) defines modern energy access as “a household having reliable and affordable access to clean cooking facilities, a first connection to electricity and then an increasing level of electricity consumption over time to reach the regional average”. By defining it at the household level, it is recognised that some other categories are excluded, such as electricity access to businesses and public buildings that are crucial to economic and social development, i.e. schools and hospitals.

Access to electricity involves more than a first supply connection to the household; our definition of access also involves consumption of a specified minimum level of electricity, the amount varies based on whether the household is in a rural or an urban area. The initial threshold level of electricity consumption for rural households is assumed to be 250 kilowatt-hours (kWh) per year and for urban households it is 500 kWh per year. The higher consumption assumed in urban areas reflects specific urban consumption patterns. Both are calculated based on an assumption of five people per household. In rural areas, this level of consumption could, for example, provide for the use of a floor fan, a mobile telephone and two compact fluorescent light bulbs for about five hours per day. In urban areas, consumption might also include an efficient refrigerator, a second mobile telephone per household and another appliance, such as a small television or a computer.

I have found when you start talking in terms of "kilowatt-hours per year" people's eyes glaze over. And when I am lecturing about "energy access" students might look up from their smart phone, tablet or laptop to register a look of understanding: "Energy access -- yeah, I have that, gotcha."

Actually I want to tell them, you have wayyyyy more than that. To better explain this issue I have made up the following graph. 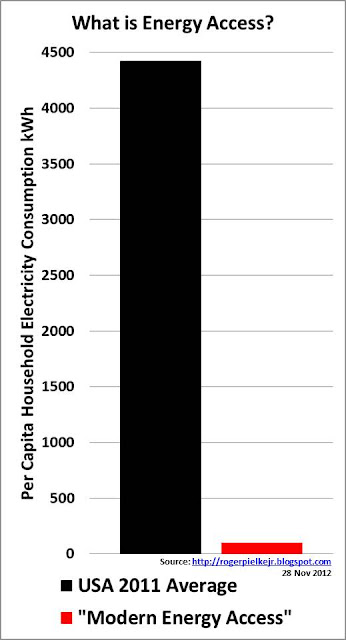 When "energy access" is used by organizations like the IEA, they mean something very different than what you, I or my students might take the term to mean in common parlance. (And note, this is no critique of the IEA, they have done excellent work on energy access issues.) The graph above provides a comparison of the 500 kWh per year household threshold for "energy access" used by the IEA to a comparable number for the United States (both numbers are expressed in per capita terms, so 100 kWh per person from IEA and data on US household electricity consumption here and people per household here).

A goal to secure 1.3 billion people access to 2.2% of the electricity that the average American uses might be characterized as a initial start to more ambitious goals, but it is not a stopping point (and again, IEA recognizes that energy access is a process, but this gets lost in broader discussions).

We do not label those who live on $1 per day as having "economic access" -- rather they are desperately poor, living just above the poverty line. Everyone understands that $1 a day is not much. Very few people get that 100 kWh per year is a pitifully small amount of energy. Therefore, I suggest that we start talking in terms of  "energy poverty" measured as a percentage of the average American (or European or Japanese or Australian or whatever energy rich context you'd prefer as a baseline, the results will be qualitatively the same). To use the IEA numbers, one would be in "energy poverty" with access to less than 2% of the energy access enjoyed by those in the rich world.

It is bad enough that the energy poor are largely ignored in our rich world debates over issues like climate change. It is perhaps even worse that our "success stories" often mean creating scenarios where the energy poor attain just 2% of the access to energy that we enjoy on a daily basis. The frustrating irony of course is that the issues that rich world environmentalists most seem to care about might be best addressed by putting energy poverty first, but that is a subject for another time.
Posted by Roger Pielke, Jr. at 11/28/2012 11:24:00 AM
Email ThisBlogThis!Share to TwitterShare to FacebookShare to Pinterest
Newer Post Older Post Home