Over the past week a debate has erupted over the sourcing of apparel to be worn by US Olympic athletes in the upcoming Olympic games. The Washington Post explains:


With their bright white pants, double-breasted blazers and bizarre berets, the uniforms designed for the United States Olympic athletes to wear at the opening ceremonies in London won’t be making anyone’s summer fashion list.

But days after Ralph Lauren released images of its 2012 outfits, U.S. lawmakers responded with a surprisingly visceral reaction to the news that the red, white and blue uniforms were made in... China.

“I am so upset. I think the Olympic committee should be ashamed of themselves. I think they should be embarrassed. I think they should take all the uniforms, put them in a big pile and burn them and start all over again,” Senate Majority Leader Harry Reid (D-Nev.), told reporters Thursday. “If they have to wear nothing but a singlet that says USA on it, painted by hand, then that’s what they should wear.”

Rep. Steve Israel (D-N.Y.): “It’s not just a label, it’s an economic solution. Today there are 600,000 vacant manufacturing jobs in this country and the Olympic committee is outsourcing the manufacturing of uniforms to China? That is not just outrageous, it’s just plain dumb. It is self-defeating.”

The issue cuts to the core of ongoing debate over manufacturing in the United States and what, if anything, policy makers should be doing about this particular sector of the economy. Here we have an issue where Republicans and Democrats have found common ground.

The Olympic uniform kerfuffle provides an opportunity to discuss what is wrong with policies focused on protecting certain sectors of the economy from the inexorable forces of globalization and productivity gains, which if well managed, can benefit everyone. These lessons are more broadly applicable to the larger debate over US manufacturing.

To appreciate these lessons, let's dig a little deeper into the Olympic apparel debate.

New York Senator Chuck Schumer (D) has an idea about what should be done:

U.S. Senator Charles E. Schumer today called on the U.S. Olympic Committee to abandon their current uniforms that were made in China and replace them with uniforms made in the United States, and suggested Rochester-based suit maker Hickey Freeman to do the job. This week, ABC News revealed that the U.S. Olympic Committee decided to outfit the American athletes at the opening ceremonies of the Olympics in uniforms made in China, instead of enlisting American workers and companies to support their national team. In the wake of this report, Schumer secured a commitment from President Mike Cohen of Rochester-based suit maker Hickey Freeman to produce the sport coats and dress trousers for the Olympic team’s uniforms for the opening ceremonies. Today, Schumer called on the Olympic Committee to scrap their current uniforms, have them made in the United States, and consider hiring Hickey Freeman to lead the charge in producing the uniforms in the United States.

For his part Schumer argues:

But this is not correct at all.

The reason that Hickey Freeman has any jobs at all in New York is arguably not because of foreign capital investments, but because the NY and US governments have repeatedly propped up the industry and the company with subsidies.

For instance, in 2004 the state of NY and city of Rochester put together a $5 million package to help the company modernize its factory in an effort to remain competitive. In addition, the US Congress has repeatedly supported the industry via tariffs and industry assistance through the "Wool Fabric Trust Fund"  created in 2000 and repeatedly reauthorized, most recently in 2010 (see this Congressional description in PDF, at p. 11).

At the time Senator Schumer explained the significance of the legislation to the fate of Hickey Freeman, arguing that that eliminating the Wool Trust Fund, which


provides Rochester’s iconic Hickey Freeman with substantial import tax relief, could lead to the closure of the Rochester facility, leading to the loss of 400 good paying jobs. Schumer said that to eliminate this program to pay for a jobs bill would be a bitter irony. Schumer today announced that the Wool Trust Fund program is safe and the Hickey Freeman employees could breathe a sigh of relief.

Louise Slaughter (D-NY) also takes credit for helping to save the company as well, "She was also instrumental working with Hickey Freeman’s former parent company Hartmax, their creditors and the Chairman of the House Financial Services Committee Barney Frank to avoid liquidation of the company."

Let's take a look at the bigger picture. Shown in the graph below are data on US jobs in the "apparel" sector and its sub-sector "mens and boys clothing" (under which Hinkley Freeman would be found), both of which are sub-categories of "manufacturing." 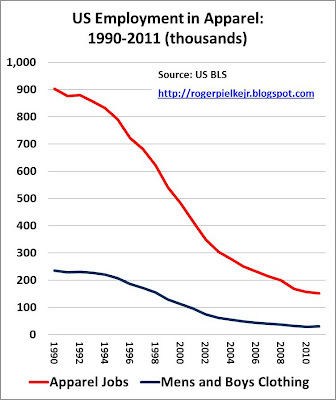 Since 1990 employment in the apparel sector has declined by 83% and in mens and boys clothing by 87% (data from BLS). Of note, almost all policy attention has been paid to efforts focused on preserving the (now) ~15% of remaining jobs rather than the fortunes of the ~85% of jobs which have been lost (e.g., skill development, job retraining, etc.). More generally, have a look at the graph and ask yourself, how well have the protectionist policies implemented since 1990 worked in any case?

Why have jobs in this industry sector declined? Because low-skilled, low-paying textile jobs are better sourced from outside the US, where "better" means at lower cost to production. Securing lower cost inputs is a key factor in sustaining productivity, which means getting more output for less input, a key factor in how we collectively become wealthier.

Back in 2009, the Indian company (SKNL) that acquired the parent company (HMX) of Hinckley Freeman explained (PDF) the logic of their investment and the strategies that they would employ to return the business to profitability:


At the onset, the first leg of value-creation opportunity is a backend-frontend integration synergy that will boost gross margins significantly. A 30% gross margin is extremely low for a business the size of HMX and operating in the market segment that HMX brands operate in. We believe we will be able to boost gross margin up significantly by backward integration of production through our Indian manufacturing operations and also through opportunistic sourcing from the Far East and Central America. . .

As per our investment plan, we envision outsourcing part of HMX’s manufacturing to our plants in India. SKNL is adept at manufacturing products currently manufactured and sold by Hartmarx, including suits, shirts and slacks. SKNL will be able to supply fabrics from Reid & Taylor and Belmonte to HMX and finished garments from our suits and shirt factory in Bangalore which will be operational within a year. This would facilitate diverting export production of factories to better value-added products from our fabric division and also provide immediate capacity for the new shirt and suit factory. By conservative estimates, it is anticipated that the back-end synergy will provide substantial additional profitable business to us within the next 3 years.

The globalization of the apparel industry is a good thing. Resources are used more efficiently. Profits are increased. The economy grows. More jobs are ultimately created. There is downside, as well, such as in jobs lost and skills that have become obsolete or uncompetitive. Policy should focus on effectively managing the downside rather than trying to stop change from occurring in the first place.

Writing at Blomberg Businessweek, Larry Popelka explains clearly why politicians from both parties have things wrong on this issue:


Garment manufacturing is a low-cost commodity business. Most of the value in the apparel industry comes from design, technology, sales, marketing, and distribution—not manufacturing. The successful players in apparel, such as Ralph Lauren and Nike (NKE), figured this out long ago.

Because the economics are bad, most U.S. apparel manufacturing operations folded decades ago. Only 97,000 Americans still have jobs in apparel production, according to the U.S. Department of Labor, and most of them are making highly specialized products like DuPont (DD) Kevlar uniforms that cannot be made elsewhere.

But just because America doesn’t manufacture apparel anymore doesn’t mean we can’t lead the industry. In fact, the world’s largest apparel companies are almost all U.S.-based, including Nike, VF (VFC), PVH (PVH), and Ralph Lauren, to name a few. These companies have grown a combined 146 percent during the past 10 years, adding more than $27 billion in revenue. Nike has created more than 15,000 new jobs in the U.S. during this time, Ralph Lauren almost 10,000. And unlike the low-paying production jobs next to sewing machines, these are well-paying jobs in marketing, accounting, design, and management.

These companies are winning globally by out-designing, out-innovating, and out-marketing the competition. Nike, for example, is unveiling a new TurboSpeed running suit at the London Olympic Games that it claims can reduce 100-meter sprint times by .023 seconds. Nike’s gear will be used by teams from many countries, including Russia, China, and of course, the U.S.

What Nike and Ralph Lauren don’t do is make their own products, in the U.S. or elsewhere—and this has become their competitive advantage.

But maybe the solution here is not to be found in policy debate. Maybe the athletes should just go back to the original uniforms worn in ancient Greece ...