Jobs and The Great Doubling 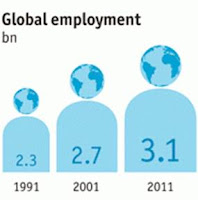 This week's Economist has a (ultimately somewhat disappointing) special report on the future of jobs.  It includes the figure above which is really provocative -- the world has added 800 million jobs over the past 20 years.  That is a lot,  of course, but the world (or more accurately, large parts of it) is presently seeing high rates of unemployment.

I thought that it would be useful to compare the growth in jobs to the growth in global GDP over the same period and here is that data: 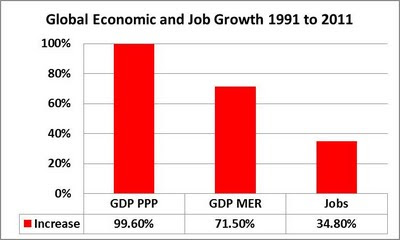 The data shows that using either MER or PPP global GDP data, growth in the global economy has far outstripped the growth in jobs by a large amount.  This indicates that at the global level, the world economy has become far more productive at generating wealth and the make up of the global economy has shifted to less job-intensive wealth generation. While both of these factors have strong positives (increasing global wealth foremost among them) they have also had the effect of leaving some people behind.

In an important essay, Harvard labor economist Richard B. Freeman explains trends in employment in recent decades as the "great doubling," a reference to the doubling of the global workforce in the 1990s.  He writes (here in PDF):


What impact might the doubling of the global workforce have on workers? To answer this question, imagine what would happen if through some cloning experiment a mad economist doubled the size of the U.S. workforce. Twice as many workers would seek employment from the same businesses. You do not need an economics Ph.D. to see that this would be good for employers but terrible for workers. Wages would fall. Unemployment would rise. But if the nation’s capital stock doubled at the same time, demand for labor would rise commensurately, and workers would maintain their economic position. In the simplest economic analysis, the impact of China, India, and the former Soviet bloc joining the global economy depends on how their entry affects the ratio of capital to labor in the world. This in turn depends on how much capital they brought with them when they entered the global system. Over the long run, it depends on their rates of savings and future capital formation.

He backs up this analysis with the following data (graph from here in PDF) that shows the ratio of capital to labor before and after the "great doubling": 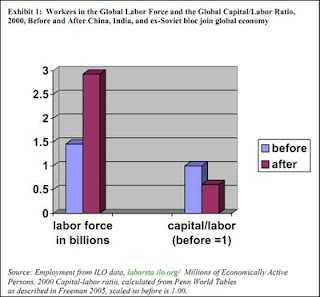 
[I]t will take about three decades to restore the global capital/ labor ratio to what it had been before China, India, and the former Soviet bloc entered the world economy, and even longer to bring it to where it might have been absent their entry. For the foreseeable future the United States and other countries will have to adjust to a relative shortfall of capital per worker and to the power this gives to firms in bargaining with workers. This will affect workers in different parts of the world differently.

For the United States and other "advanced countries" Freeman explains that the new context means that a competitive advantage in skilled labor is no longer assured:


The model that economists use to analyze trading patterns between advanced countries and developing countries assumes that the advanced countries have highly educated workers who enable them to monopolize cutting-edge innovative sectors while the developing countries lack the technology and skilled workforce to produce anything beyond lower-tech products. In this model, American workers benefit from the monopoly the United States has in the newest high-tech innovations. The greater the rate of technological advance and the slower the spread of new technology to low-wage countries, the higher paid are U.S. workers compared with workers in the developing countries.

But the spread of higher education and modem technology to low-wage countries can reduce advanced countries’ comparative advantage in high-tech products and adversely affect workers in the advanced countries. In 2004, when many engineers and computer specialists were troubled by the offshore transfer of skilled work,

Paul Samuelson reminded economists that a country with a comparative advantage in a sector can suffer economic loss when another country competes successfully in that sector. The new competitor increases supplies, and this reduces the price of those goods on world markets and the income of the original exporter. Workers have to shift to less desirable sectors—those with lower chance for productivity growth, with fewer good jobs, and so on. Some trade specialists reacted negatively to Samuelson’s reminder. What he said was well-known to them but irrelevant. In the real world it would never happen.

Samuelson is right, and his critics are wrong. The assumption that only advanced countries have the educated workforce necessary for innovation and production of high-tech products is no longer true.

And this returns us back to the issue of what constitutes an "educated workforce" and hints at the role of the workforce in innovation and competition. In his piece, Freeman falls back on the well worn call for more scientists, engineers and basic research from US universities. It is my view that conventional call for more science and engineering this is not enough (indeed, Juan Lucena documents how calls for more science and engineering education have been the received solution to every major national problem since at least Sputnik).

As this post is getting on in length, I will return to Freeman's essay in a subsequent post, and critique his good and bad scenarios.
Posted by Roger Pielke, Jr. at 9/14/2011 09:34:00 AM
Email ThisBlogThis!Share to TwitterShare to FacebookShare to Pinterest
Newer Post Older Post Home