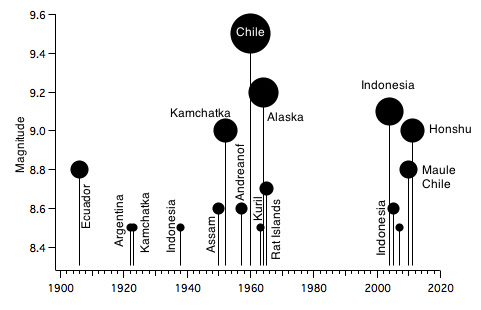 Roger Bilham, a professor of geology here at Colorado and a world expert on earthquakes, is just back from Japan and has put up a report on the earthquake. The image above, from his report, shows the planet's largest earthquakes from 1900. Of the notable 40-year gap starting in the 1960s Roger writes:


The Honshu earthquake is one of 5 earthquakes in the world to have exceeded Mw=8.4 since 2004. Initial estimates of its magnitude (Mw=8.9) have now been superceded by its Mw=9.0 status. The recent 5 mega-quakes were preceded by a four decade gap that followed a cluster of megaquakes between 1950 and 1964. No significance to the gap has been established although there appears to have been a reduction in global energy release after the 1960 cluster

Of the effects of the earthquake and tsunami on the Fushima nuclear power facility he writes:


The Fukushima Nuclear reactor successfully shut down in the Mw=9 earthquake. This must be considered a success, because shaking intensities were apparently close to Mercalli Intensity VII. Thirty minutes later a tsunami flooded the reactor buildings. In hindsight it appears impossible to believe that nuclear power stations were located on a shoreline without recognizing the engineering difficulties attending prolonged immersion by a large tsunami. In 1896 a 33 m high tsunami drowned the Sanriku coastline 200 km to the north of Fukushima. A 23 m wave surged on the same coast in 1933, and in 1993 a 30 m wave swept over Okushira Island. The Fukushima plant was protected by a 5.7 m tsunami barrier but the wave height here apparently exceeded 10 m, flooding the generators and electrical wiring in the basement and lower levels of the power plant. Nuclear power plants are simply not designed to be immersed in sea water.

In his travelogue, Roger reminds us that seismologists are not like the rest of us: 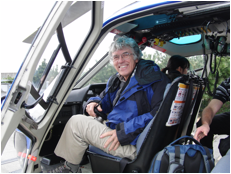 I chose the 14th floor rather than the 3rd floor because being a seismologist, I wanted to really experience large aftershocks at first hand. Only the following day did I realize there was no 13th floor so I guess the 13th floor had been labeled 14.  I slept through two M=5.5 events but awoke with delight to a Mw6.2 about 80 km away.  Like thunder and lightning, if you count the time between the first jolt and the rolling surface waves you can gauge the distance quite well.

During the 2 am aftershock, the building heaved mightily and erratically at first, and then in the next ten seconds settled to a long swaying motion with gentle creaks of approval from the furniture.  There was that uneasy feeling in the middle about whether it was going to get bigger.  But no, it stopped eventually.  Pretty lame sort of event in fact - no sirens, no screaming from nearby rooms.  I found out later I was the sole occupant of the 13/14th floor.