Attribution and the Russian Heat Wave 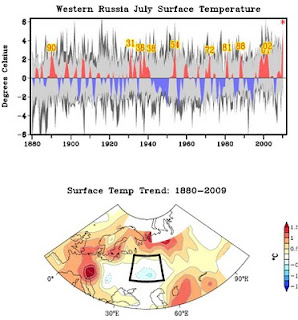 Some of my NOAA colleagues here in Boulder have a new paper forthcoming in Geophysical Research Letters (PDF) looking at last summer's heat wave in Russia.  They conclude:


Our analysis points to a primarily natural cause for the Russian heat wave. This event appears to be mainly due to internal atmospheric dynamical processes that produced and maintained an  intense and long-lived blocking event. Results from prior studies suggest that it is likely that the intensity of the heat wave was further increased by regional land surface feedbacks. The absence of long-term trends in regional mean temperatures and variability together with the model results indicate that it is very unlikely that warming attributable to increasing greenhouse gas concentrations contributed substantially to the magnitude of this heat wave.

Such attribution, they warn, may only be a matter of time:


To assess this possibility for the region of western Russia, we have used the same IPCC model simulations to estimate the probability of exceeding various July temperature thresholds over the period 1880-2100 (Figure 4).The results suggest that we may be on the cusp of a period in which the probability of such events increases rapidly, due primarily to the influence of projected increases in greenhouse gas concentrations.

It would be interesting to assess how much time such attribution might take using a method similar to what we used for detection of trends in hurricane damage under model projected futures.

For an earlier discussion see this, and thanks KK.
Posted by Roger Pielke, Jr. at 3/10/2011 10:09:00 AM
Email ThisBlogThis!Share to TwitterShare to FacebookShare to Pinterest
Newer Post Older Post Home