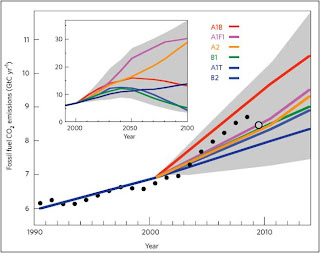 In a correspondence in Nature Geoscience a group of scholars (Manning et al. 2010) take issue with claims made by the Global Carbon Project that has fed into oft-repeated claims that global emissions are increasing above the highest of IPCC scenarios. For instance, in 2008 the GCP issued a press release that claimed:

Emissions growth for 2000-2007 was above even the most fossil fuel intensive scenario of the Intergovernmental Panel on Climate Change (SRES-IPCC).

This perspective has been echoed by activists, such as Joe Romm, who wrote the following in Nature Reports Climate Change:

The problem with such statements is that they are wrong. (To defend GCP a bit, their presentation has become a bit more nuanced in more recent years, but still not quite correct.) Manning et al. explain the problem that they seek to correct:

Fossil fuel CO2 emissions have increased significantly. However, contrary to some statements in recent publications1–3, current emissions are not higher than covered in the climate change scenarios used by the last two Intergovernmental Panel on Climate Change (IPCC) assessments4,5. And although emissions were recently near the top of the range that has been covered6, the changes in atmospheric CO2 concentration follow long-term average emissions rather than short-term variations.

The problem lies in a technical distinction between scenario averages (the mean across a family of scenarios) and scenario markers (a representative scenario from a family). Manning et al. expalin:

We therefore take issue with the comparison8,9 of the estimated evolution of industrial CO2 emissions since 1990 with subgroup averages of the SRES scenarios, rather than with the illustrative scenarios. These comparisons can be misleading over the next few decades because the upper boundary of the range covered by subgroup average emissions is significantly lower than the upper boundary of the range of illustrative scenarios. As a result, the comparisons with subgroup averages have led others1–3,10 to incorrectly conclude that current emissions are higher than the values used in climate change projections. This may be spreading into general reviews of climate change science11,12, causing a growing inconsistency between the modelling work that has been done for the IPCC and its broader interpretation.

The figure at the top of this post is from the Manning et al. paper.

Interestingly, I wrote an email to the GCP in November, 2007 as part of a discussion on this exact issue, making essentially the same points. Here are some excerpts from what I sent to GCP:

The IPCC SRES has 40 scenarios from four "families" of emissions. The emissions profiles for fossil fuel and industry for these 40 are provided here:

Looking across the 40 SRES scenario projections for 2010 fossil fuel and industry CO2 emissions shows a range of 7.25 to 10.32 GtC, equating to annual growth rates of .05% to 3.95% per year. If the 2000-2006 observed growth rate is 3.3% per year wouldn't this suggest that figure 7 in the November 15 GCP_CarbonCycleUpdate is fairly misleading, and in fact incorrect when it states:

"Current emissions are tracking above the most intense fossil fuel emission scenario established by the IPCC Special Report on Emissions Scenarios-SRES (2000)"?

For its part the IPCC SRES report notes, "The wide ranges of energy and industry-related CO2 emissions in the SRES scenarios reflect the fact that the "best" or the "most likely" quantifications are nearly impossible to identify." Would it not be accurate to say instead that current emissions remain within the envelope of estimates provided by the IPCC in 2000, but in the top 12.5% of scenarios (there are 5 of 40 at a growth rate of 3.3%/year and higher for 2000-2010)? . . .

I think that taking either the marker or the average of the SRES scenario families is far less robust than simply presenting the envelope of projections in the entire 40 scenarios. The IPCC itself urges great caution in aggregating scenarios, and goes to great length to advise that there is no basis for assign probabilities to any of them (hence, no basis for averaging).

So I would urge some greater caution in how you present the recent trends than I observe in your powerpoint. They are surprising and very significant, but they are not outside the IPCC SRES envelope (though perhaps outside your own simpliifcation of that envelope). Your message is far too important to risk being caught up in such a silly point.

The fact that emissions have been running at the top half of the SRES range, and above most of the marker scenarios is troubling enough, for reasons that we explained in Nature in 2008 (Pielke et al. 2008, PDF). There is no need to misrepresent the science to claim that things are worse than we thought. The are already worse than we thought without the misrepresentation.

Kudos to Manning et al. for helping to set the record straight.
Posted by Roger Pielke, Jr. at 5/28/2010 11:36:00 AM
Email ThisBlogThis!Share to TwitterShare to FacebookShare to Pinterest
Newer Post Older Post Home