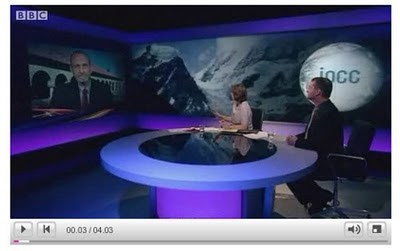 Tonite I was on BBC Newsnight (screenshot above) with Professor Chris Field, the (new) head of IPCC Working Group II. I knew that the interview was not going to go well when Professor Field explained, not-so-accurately, that as soon as the IPCC heard about the glacier error it quickly came out with a statement clarifying the matter. No mention of "voodoo science" or "schoolboy science" or the extended period of denial of error by the IPCC leadership.

I had a chance to summarize the problems in the IPCC associated with its creation of the "mystery graph" and the outright falsification of my views in the IPCC review comments. Professor Fields completely ignored these issues and instead chose to obfuscate and deny any problem whatsoever. This is remarkable because all Professor Field would have had to say was something like the following, "These are serious allegations, especially about the misrepresentations of Roger's views in the review process. We should tighten up our procedures to make sure this sort of thing does not happen again." And then the IPCC should follow it up with some improvements to the process.

Instead, Professor Field tried to talk over me and deny, deny, deny. As I said in the interview, this issue is not ambiguous. The studies are not equivocal. There is no signal of rising temperatures in the disaster record. Period. Maybe there will be in the future, but there wasn't in 2006, when the IPCC deadline for publication occurred and there is not now. Further, both the "mystery graph" and the falsification of my views are unambiguous failures of the IPCC process to ensure that accurate information is included in its reports. How can this be denied?

Why the IPCC has chosen to take a stand on this issue -- to defend the indefensible -- is beyond me. If you truly believe that science is self-correcting and truth wins in the end, then the IPCC has staked out a position that it cannot win on in the long term, no matter how much spin is applied in the short term. Apparently, however the short term has a ways yet to run -- Rajendra Pachauri makes the front page of tomorrow's Guardian, where he says:

"You can't expect me to be personally responsible for every word in a 3,000 page report."

Well then, who is? Because I'd sure like to know who is responsible for the IPCC lying about my views.

If you are in the UK you can see the first half of the Newsnight segment here (not sure where the rest is) and if it shows up on YouTube I'll provide a link to the segment in an update.
Posted by Roger Pielke, Jr. at 2/02/2010 05:16:00 PM
Email ThisBlogThis!Share to TwitterShare to FacebookShare to Pinterest
Newer Post Older Post Home