Imagine if an industry-funded government contractor had a hand in writing a major federal report on climate change. And imagine if that person used his position to misrepresent the science, to cite his own non-peer reviewed work, and to ignore relevant work in the peer-reviewed literature. There would be an outrage, surely . . .

The Obama Administration has re-released a report (PDF) first issued in draft form by the Bush Administration last July (still online PDF). The substance of the report is essentially the same as last year's version, with a bit more professionalism in the delivery. For instance, the photo-shopped picture of a flood appears to be removed and the embarrassing executive summary has been replaced by something more appropriate.

This post is about how the report summarizes the issue of disasters and climate change, including several references to my work, which is misrepresented. This post is long and detailed, which is necessary to support my claims. But stick with it, or skip to the end if you've seen the details before (and long-time readers will have seen them often), there is a surprise at the end.

Here is the relevant paragraph of the CCSP report, found on p. 105:

While economic and demographic factors have no doubt contributed to observed increases in losses,346 these factors do not fully explain the upward trend in costs or numbers of events.344,347 For example, during the time period covered in the figure to the right, population increased by a factor of 1.3 while losses increased by a factor of 15 to 20 in inflation-corrected dollars. Analyses asserting little or no role of climate change in increasing the risk of losses tend to focus on a highly limited set of hazards and locations. They also often fail to account for the vagaries of natural cycles and inflation adjustments, or to normalize for countervailing factors such as improved pre- and post-event loss prevention (such as dikes, building codes, and early warning systems).348,349

Lets take it sentence by sentence.

While economic and demographic factors have no doubt contributed to observed increases in losses,346 these factors do not fully explain the upward trend in costs or numbers of events.344,347

Reference 346 is to a paper I co-authored:

In that paper we did indeed conclude that economic and demographic factors have contributed to losses related to hurricanes. In fact, we concluded that these factors accounted for all of the increase in hurricane losses over the period of record:

The lack of trend in twentieth century normalized hurricane losses is consistent with what one would expect to find given the lack of trends in hurricane frequency or intensity at landfall.

The CCSP report however, says the opposite, that these factors do not explain the upward trend in costs or numbers of events. To support this claim they provide two citations. Lets consider each in turn, first #344:

If you go to Mills, and I have, you will find that it is a commentary that does not offer any new research. Instead, its assertion that societal factors cannot explain the increase in disaster losses is based on a further reference; here is what Mills says:

You will see in my comprehensive discussion of Mills that he relied on two sources to support this claim. The first source actually refers to the second, so there is only one source. That one source is a 2000 Munich Re report, which for reasons I explain in the previous link does not actually support its claim.

But more problematically, why is a report characterized by Science Advisor John Holdren as being the "most up-to-date, authoritative, and comprehensive" analysis relying on a secondary, non-peer source citing another non-peer reviewed source from 2000 to support a claim that a large amount of uncited and more recent peer reviewed literature says the opposite about?

The second citation referred to is #347:

Which is of course Chapter 1 of the 2007 IPCC AR4 WGII report. That report relied on a single study to make the following claim (at p. 110):

A global catalogue of catastrophe losses was constructed(MuirWood et al., 2006), normalised to account for changes that have resulted from variations in wealth and the number and value of properties located in the path of the catastrophes . . . Once the data were normalised, a small statistically significant trend was found for an increase in annual catastrophe loss since 1970 of 2% per year.

Muir-Wood (2006) is of course the white paper prepared in advance of the Hohenkammer Workshop on disaster losses that I organized along with Peter Hoeppe (of Munich Re) in 2006. I called the IPCC out on this cherrypicking/misrepresentation when the report was first released. Even though Muir-Wood et al. (2006) found no trends from 1950, and more importantly the Hohenkammer Workshop resulted in a consensus finding that such attribution was not possible, the Muir-Wood et al. study has been cherry-picked by the IPCC and before that the Stern Review and now, indirectly, again by the CCSP.

So to summarize: sentence one is not supported by the citations provided, which lead in both cases to selectively chosen non-peer revied sources, and the citations that are peer reviewed on this subject come to an opposite conclusion and are ignored.

That figure appears to the right and its problems are many. 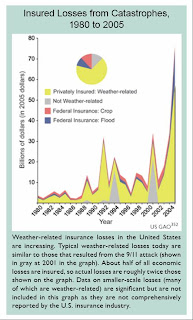 1. The figure includes a major earthquake and 9/11.
2. The figure and the text neglect the effects of increasing wealth.
3. Published peer reviewed studies show no long-term trends in flood or hurricane losses once adjusted for societal change, yet those data are included.

Analyses asserting little or no role of climate change in increasing the risk of losses tend to focus on a highly limited set of hazards and locations. They also often fail to account for the vagaries of natural cycles and inflation adjustments, or to normalize for countervailing factors such as improved pre- and post-event loss prevention (such as dikes, building codes, and early warning systems).348,349

I have to think that that the third sentence is referring to at least some of my work. Places that have been looked at include the United States for floods, hurricanes, and tornadoes (I'll ignore other studies outside the US since this CCSP report is referring only to the US). So what does that leave remaining? Not much.

The fourth sentence cannot be referring to my work, since it explicitly considers variability, inflation, and mitigation. Strangely enough that sentence is supported (reference #348) by a letter to Science (PDF) that I wrote on the Mills (2005) paper. In that letter I stated:

Presently, there is simply no scientific basis for claims that the escalating cost of disasters is the result of anything other than increasing societal vulnerability.

So it is strange to see it cited suggesting something that it does not.

Finally, #349 goes to a new paper by Mills which can be found here in PDF. Mills 2009 offers nothing related to the subject of this sentence, so it is strange to see it cited as a source here.

How can we explain how such a patently bad paragraph full of misrepresentations appeared in a U.S. government report?

One answer might lie in the fact that Evan Mills was a co-author of the report (p. 159). Do you think that had anything to do with it? His list of consulting clients is positively Phil Cooney-esque. Here are a few businesses and organizations that he lists under Consulting & Advising in his resume:

So a person responsible for misrepresenting science in a government report has ties and presumably financial interests with companies that have an interest in climate policy outcomes? No, couldn't be. Could it?

1. Over the long-term U.S. hurricane landfalls have been declining.

2. Nationwide there have been no long-term increases in drought.

3. Despite increases in some measures of precipitation (pp. 46-50, pp. 130-131), there have not been corresponding increases in peak streamflows (high flows above 90th percentile).

4. There have been no observed changes in the occurrence of tornadoes or thunderstorms

5. There have been no long-term increases in strong East Coast winter storms (ECWS), called Nor’easters.

6. There are no long-term trends in either heat waves or cold spells, though there are trends within shorter time periods in the overall record.