A new paper has been published in the Bulletin of the American Meteorological Society titled 'Tropical Cyclone Damages in China: 1983 to 2006" by Zhang et al. available here in PDF. The paper finds no trends in either tropical cyclone landfalls or in normalized damage, as indicated in the following two figures from the paper. 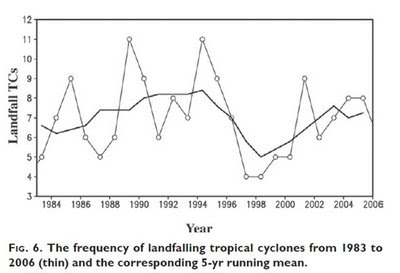 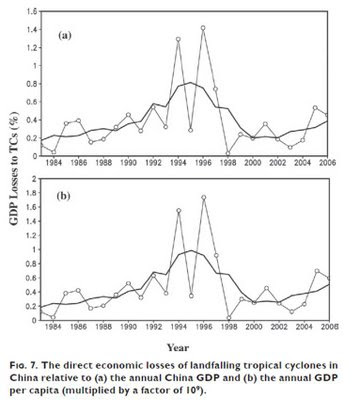 What does this mean? This means everywhere that scholars have looked and published results in the peer-reviewed literature (including the United States, Caribbean, Central America, Mexico, China, India, non-China East Asia, and Australia), there have been no trends identified over the periods of record in either landfalling tropical storms or their damage.

Even though this is what the peer reviewed literature says, acknowledging as much is enough to get you labeled a "denier." We do live in interesting times.
Posted by Roger Pielke, Jr. at 6/30/2009 10:37:00 AM
Email ThisBlogThis!Share to TwitterShare to FacebookShare to Pinterest
Newer Post Older Post Home