The United Kingdom is going to have a general election on May 7th, just over five weeks from now. There are high stakes and a lot of uncertainties, probably more so than usual. Yesterday, David Cameron (Conservative and Prime Minister) and Ed Miliband (Labor and party leader), squared off in parallel interviews with interviewer Jeremy Paxman in a broadcast watched by 12% of the UK TV audience.

Where prediction is concerned, it is always worth evaluating our forecasts, lest we trick ourselves into thinking we know more than we actually do. So for fun, I am going to evaluate predictions of the upcoming UK elections.

Courtesy Will Jennings, a political scientist at the University of Southampton @drjennings, via Twitter, below is a summary of various predictions of the outcome of the upcoming election. 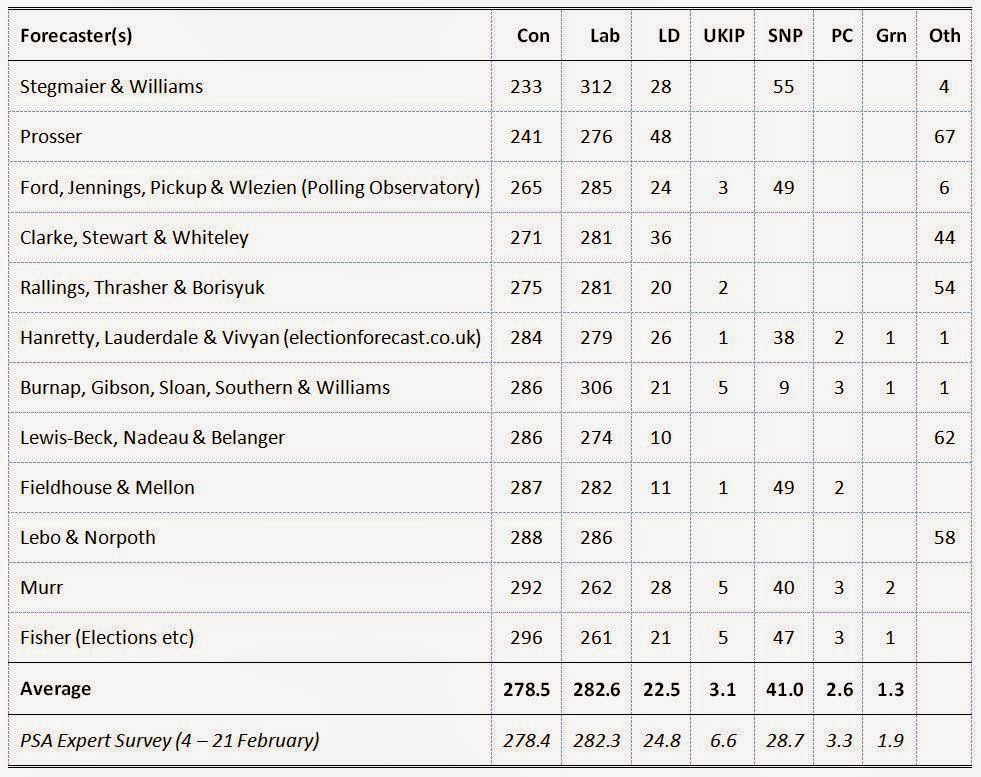 The 12 predictions span a huge range, +/-33 seats for the Conservatives and +/-25.5 for Labor. Six of the 12 forecast Labor holding more seats than the Conservatives, and 6 forecast less. With such a wide spread, it is mathematically safe to say that some predictions will be better than others.

I am going to evaluate 2 questions using this data after the results are in.

1. Which forecast showed the most skill?
2. Does the collection of forecasts demonstrate any skill?

It is important to note that there are, effectively, a limitless number of ways that a forecast evaluation might be structured, with different results as a consequence. Always beware post hoc forecast evaluations. I have no horse in this race, so I am producing a very simple evaluation, based on methods I have used before on many occasions. These choices could of course be made differently.


Given that there is a wide spread among multiple forecasts, we have to very careful about committing the logical fallacy of using the election outcomes to select among forecasts. This is of course a very common problem in science (which i described in this paper in PDF in the context of hurricane forecasts in reinsurance applications). I have described this problem as the hot hand fallacy meets the guaranteed winner scam. It is easy to confuse luck with skill.

So I will also be evaluating the forecast ensemble. I will do this in 2 ways. I will evaluate the average among forecasts and I will evaluate the distribution of forecasts, both against the naive forecast as well as the election outcome. We can expect to be able to conclude very little about the skill of a forecasting method (as compared to a specific forecast) because we are looking at only one election. So my post-election analysis will necessarily include the empirical and the metaphysical. But we'll cross those bridges when we get there.

This exercise is mainly for fun, but because my new book has a chapter on prediction (that I am in the midst of completing) it is also a useful way for me to re-engage some of the broader literature and data in the context of a significant upcoming election.

Comments, suggestions most welcomed from professionals and amateurs alike!
Posted by Roger Pielke, Jr. at 3/27/2015 07:49:00 AM
Email ThisBlogThis!Share to TwitterShare to FacebookShare to Pinterest
Newer Post Older Post Home