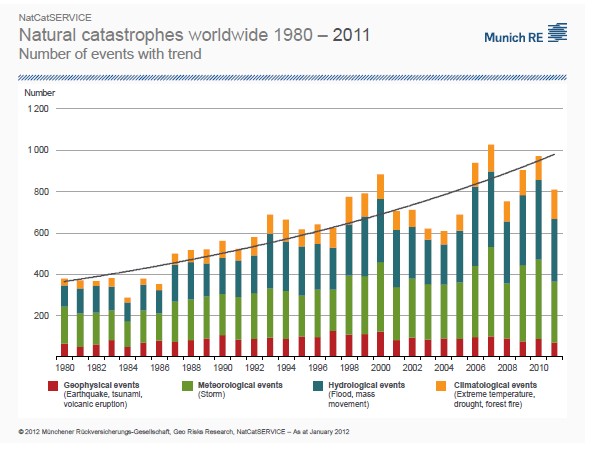 Shali Mohleji, of the AMS Policy Program, and I have a new paper out, which builds on her dissertation work. In the paper we take a close look at the dataset on global disaster losses, maintain by Munich Re. The folks at Munich Re were extremely helpful in this work.

Our paper focused on dis-aggregating the Munich Re global dataset into its regional and phenonmena components, and then comparing trends among the dis-aggregation with the peer-reviewed literature on disaster losses in regions and for specific phenomena.

The conclusion of the analysis is:


The bottom line here is that a signal of greenhouse gas emissions cannot be found in the aggregate loss data from Munich Re. Those making claims to the contrary should take note.

If that sounds familiar, it should, as Bouwer (2011), Neumayer and Bartel (2011) and IPCC (2012) came to the same conclusion. With apologies to John Holdren, this is the scientific mainstream, get on board.

One other quick bit from the paper: The post-1980 trend of increasing "global" losses Munich Re dataset is mainly the signal of US hurricane losses -- 57% of the overall trend.

Reconciliation of Trends in Global and Regional Economic Losses from Weather Events: 1980–2008

In recent years claims have been made in venues including the authoritative reports of the Intergovernmental Panel on Climate Change and in testimony before the US Congress that economic losses from weather events have been increasing beyond that which can be explained by societal change, based on loss data from the reinsurance industry and aggregated since 1980 at the global level. Such claims imply a contradiction with a large set of peer-reviewed studies focused on regional losses, typically over a much longer time period, which concludes that loss trends are explained entirely by societal change. To address this implied mismatch, we disaggregate global losses from a widely utilized reinsurance dataset into regional components and compare this disaggregation directly to the findings from the literature at the regional scale, most of which reach back much further in time. We find that global losses increased at a rate of $3.1 billion/year (2008 USD) from 1980–2008 and losses from North American, Asian, European, and Australian storms and floods account for 97% of the increase. In particular, North American storms, of which U.S. hurricane losses compose the bulk, account for 57% of global economic losses. Longer-term loss trends in these regions can be explained entirely by socioeconomic factors in each region such as increasing wealth, population growth, and increasing development in vulnerable areas. The remaining 3% of the global increase 1980 to 2008 is the result of losses for which regionally based studies have not yet been completed. On climate time scales, societal change is sufficient to explain the increasing costs of disasters at the global level and claims to the contrary are not supported by aggregate loss data from the reinsurance industry.

If you would like a pre-publication copy of the full manuscript, please send me an email request.