Last week in a Congressional hearing, John Holdren, the president's science advisor, characterized me as being outside the "scientific mainstream" with respect to my views on extreme events and climate change. Specifically, Holdren was responding directly to views that I provided in Senate testimony that I gave last July (and here in PDF).

To accuse an academic of holding views that lie outside the scientific mainstream is the sort of delegitimizing talk that is of course common on blogs in the climate wars. But it is rare for political appointee in any capacity -- the president's science advisor no less -- to accuse an individual academic of holding views are are not simply wrong, but in fact scientifically illegitimate. Very strong stuff.

Given the seriousness of Holdren's charges and the possibility of negative professional repercussions, via email I asked him to substantiate or correct his characterization, to which he replied quite quickly that he would do so in the form of a promised follow-up to the Senate subcommittee.

Here is what I sent him:

I hope this note finds you well. I am writing in response to your characterization of me before the Senate Environment and Public Works Committee's Subcommittee on Oversight yesterday, in which you said that my views lie "outside the scientific mainstream."

This is a very serious charge to make in Congressional testimony about a colleague's work, even more so when it comes from the science advisor to the president.

The context of your comments about me was an exchange that you had with Senator Sessions over my recent testimony to the full EPW Committee on the subject of extreme events. You no doubt have seen my testimony (having characterized it yesterday) and which is available here:
http://sciencepolicy.colorado.edu/admin/publication_files/2013.20.pdf

Your characterization of my views as lying "outside the scientific mainstream" is odd because the views that I expressed in my testimony are entirely consonant with those of the IPCC (2012, 2013) and those of the US government's USGCRP.  Indeed, much of my testimony involved reviewing the recent findings of IPCC SREX and AR5 WG1. My scientific views are also supported by dozens of peer reviewed papers which I have authored and which have been cited thousands of times, including by all three working groups of the IPCC. My views are thus nothing if not at the center of the "scientific mainstream."

I am writing to request from you the professional courtesy of clarifying your statement. If you do indeed believe that my views are "outside the scientific mainstream" could you substantiate that claim with evidence related specifically to my testimony which you characterized pejoratively? Alternatively, if you misspoke, I'd request that you set the record straight to the committee.

I welcome your response at your earliest opportunity.

Today he has shared with me a 6-page single space response which he provided to the Senate subcommittee titled "Critique of Pielke Jr. Statements on Drought." Here I take a look at Holdren's response.

In a nutshell, Holdren's response is sloppy and reflects extremely poorly on him. Far from showing that I am outside the scientific mainstream, Holdren's follow-up casts doubt on whether he has even read my Senate testimony. Holdren's justification for seeking to use his position as a political appointee to delegitimize me personally reflects poorly on his position and office, and his response simply reinforces that view.

His response, (which you can see here in full in PDF) focuses entirely on drought -- whereas my testimony focused on hurricanes, floods, tornadoes and drought. But before he gets to drought, Holdren gets off to a bad start in his response when he shifts the focus away from my testimony and to some article in a website called "The Daily Caller" (which is apparently some minor conservative or Tea Party website, and the article appears to be this one).


Dr. Pielke also commented directly, in a number of tweets on February 14 and thereafter, on my February 13 statements to reporters about the California drought, and he elaborated on the tweets for a blog post on The Daily Caller site (also on February 14). In what follows, I will address the relevant statements in those venues, as well. He argued there, specifically, that my statements on drought “directly contradicted scientific reports”, and in support of that assertion, he offered the same statements from his July testimony that were quoted by Senator Sessions.

Let me be quite clear -- I did not write anything for "The Daily Caller" nor did I speak or otherwise communicate to anyone there. The quote that Holdren attributes to me - “directly contradicted scientific reports” -- is actually written by "The Daily Caller." Why that blog has any relevance to my standing in the "scientific mainstream" eludes me, but whatever. This sort of sloppiness is inexcusable.

Leaving the silly misdirection aside -- common on blogs but unbecoming of the science advisor to the most powerful man on the planet -- let's next take a look at Holdren's substantive complaints about my recent Senate testimony.

As a starting point, let me reproduce in its entirety the section of my Senate testimony (here in PDF) which discussed drought.

8. Drought has “for the most part, become shorter, less frequent, and cover a smaller portion of the U. S. over the last century.”22 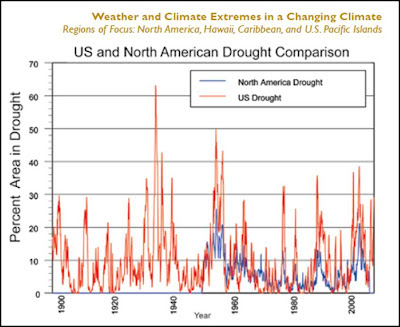 Figure 8. Figure 2.6 from CCSP (2008) has this caption: “The area (in percent) of area in severe to extreme drought as measured by the Palmer Drought Severity Index for the United States (red) from 1900 to present and for North America (blue) from 1950 to present.”

Note: Writing in Nature Senevirnate (2012) argues with respect to global trends that, “there is no necessary correlation between temperature changes and long-term drought variations, which should warn us against using any simplifications regarding their relationship.”23

21 CCSP (2008) notes that “the main exception is the Southwest and parts of the interior of the West, where increased temperature has led to rising drought trends.”

22 This quote comes from the US Climate Change Science Program’s 2008 report on extremes in North America.

Let's now look at Holdren's critique which he claims places me "outside the scientific mainstream."


Holdren Complaint #1:  "I will show, first, that the indicated quote [RP: This one: "“droughts have, for the most part, become shorter, less frequent, and cover a smaller portion of the U. S. over the last century.”21"] from the US Climate  Change Science Program (CCSP) about U.S. droughts is missing a crucial adjacent sentence in  the CCSP report, which supports my position about drought in the American West. . . That being so, any reference to the CCSP 2008 report in this context should include not just the sentence highlighted in Dr. Pielke’s testimony but also the sentence that follows immediately in the relevant passage from that document and which relates specifically to the American West."

What is that sentence in question from the CCSP 2008 report that Holdren thinks I should have included in my testimony? He says it is this one:


"The main exception is the Southwest and parts of the interior of the West, where increased temperature has led to rising drought trends."

Readers (not even careful readers) can easily see Footnote 21 from my testimony, which states:


CCSP (2008) notes that “the main exception is the Southwest and parts of the interior of the West, where increased temperature has led to rising drought trends.”

Um, hello? Is this really coming from the president's science advisor?

Holdren is flat-out wrong to accuse me of omitting a key statement from my testimony. Again, remarkable, inexcusable sloppiness.

Holdren's reply next includes a section on drought and climate change which offers no critique of my testimony, and which needs no response from me.


Holdren Complaint #2: Holdren implies that I neglected to note the IPCC's reference to the fact that drought is a regional phenomena: "Any careful reading of the 2013 IPCC report and other recent scientific literature about on the subject reveals that droughts have been worsening in some regions in recent decades while lessening in other regions."

Again, even a cursory reading of what I quoted from the IPCC shows that Holdren's complaint does not stand up. Here is the full quote that I included in my testimony from the IPCC on drought:


“There is medium confidence that since the 1950s some regions of the world have experienced a trend to more intense and longer droughts, in particular in southern Europe and West Africa, but in some regions droughts have become less frequent, less intense, or shorter, for example, in central North America and northwestern Australia.”


Holdren Complaint #3: Near as I can tell Holdren is upset that I cited a paper from Nature that he does not like, writing, "Dr. Pielke’s citation of a 2012 paper from Nature by Sheffield et al., entitled “Little change in global drought over the past 60 years”, is likewise misleading."

He points to a January 2014 paper in Nature Climate Change as offering a rebuttal to Sheffield et al. (2012).

The first point to note in response is that my citing of a paper which appears in Nature does not provide evidence of my being "outside the scientific mainstream" no matter how much Holdren disagrees with the paper. Academics in the "scientific mainstream" cite peer-reviewed papers, sometimes even those in Nature. Second, my testimony was delivered in July, 2013 and the paper he cites as a rebuttal was submitted in August, 2013 and only published in early 2014. I can hardly be faulted for not citing a paper which had not yet appeared.  Third, the 2014 paper that Holdren likes better actually supports the IPCC conclusions on drought and my characterization of them in my Senate testimony.The authors write (PDF):


How is drought changing as the climate changes? Several recent papers in the scientific literature have focused on this question but the answer remains blurred.

The bottom line here is that this is an extremely poor showing by the president's science advisor. It is fine for experts to openly disagree. But when a political appointee uses his position not just to disagree on science or policy but to seek to delegitimize a colleague, he has gone too far.
Posted by Roger Pielke, Jr. at 3/01/2014 09:57:00 AM
Email ThisBlogThis!Share to TwitterShare to FacebookShare to Pinterest
Newer Post Older Post Home