[UPDATE: Foreign Policy has a story up titled "Frau Flip Flop" (with the image below).  In the article Paul Hockenos writes that,

"Some observers even say she has cleverly stolen the left-wing opposition's trump card and will win back voters by making Germany a model for clean, energy-efficient states with a thriving trade in solar panels and wind turbines. Finally, a vision! Even if it's not hers.

But it's hard to believe that Merkel can credibly reinvent herself again as the "ecology chancellor" and simply follow the path of least resistance to another term in office. In fact, her dramatic confirmation of Green policies will probably put wind in the sails of the original environmental party, cementing its status as a viable alternative to both the Social Democrats and the Christian Democrats.What Merkel may well have done is pave the way for the first-ever Green chancellor in 2013, as head of a ruling coalition like the one currently in the southwestern region of Baden-Württemberg."]

In The Climate Fix I lauded Germany's forward-looking energy policies, in which they had decided to use the technologies of today as a resource from which to build a bridge to tomorrow's energy technology (German readers, please see this translated essay as well). Germany's government has now burned that bridge by announcing the phase-out of nuclear power by 2022.

There is a lot of interesting commentary around. See especially the discussions by Werner Krauss at the Klimazwiebel (here and here).  Der Spiegel has a hard-hitting essay by Roland Nelles describing what he calls "Merkelism":

To a certain extent, the decision to phase out nuclear energy is a victory for Merkel's style of leadership -- let's call it Merkelism. The politics of Merkelism are based on two principles. The first is that, if the people want it, it must be right. The second is that whatever is useful to the people must also be useful to the chancellor.

With Merkelism, policies are developed with a long view -- namely with the next national election in mind. After the Fukushima catastrophe, the chancellor had two choices: She could either decide in favor of an expedited phaseout and take on the proponents of nuclear power within her own party. Or she could stubbornly stand behind her government's 2010 decision to extend the operating lives of Germany's nuclear power plants (itself a reversal of an earlier phaseout passed by the government of former Chancellor Gerhard Schröder) -- and take on the majority of the German population.

In the end, Merkel chose the lesser of the two evils. Even if it has irritated her own party, in the chancellor's mind it was the correct thing to do. It was also the only choice Merkel had if she wants to remain chancellor. Anything else would have led to a protracted debate over nuclear power with the opposition that Merkel could only lose. With the phaseout, she has a good chance of keeping the sympathies of a majority of voters, who are likely to conclude that she's not doing such a bad job after all.

The image at the top right of the excerpt above comes from Der Spiegel, and shows the latest public opinion polls which indicate that the Greens are running a strong second. The Greens are thus well placed as a future coalition partner, putting some had numbers behind Nelles' argument. 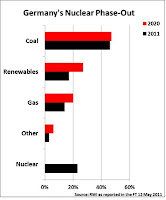 I have quickly calculated the implications for carbon dioxide emissions of the German decision, based on a projection of the 2020 electricity mix from RWI as reported by the Financial Times.  These estimates are shown in the graph to the left.

Using these numbers and the simplified carbon dioxide intensities from The Climate Fix I calculate the carbon dioxide emissions from Germany electricity generation, assuming constant demand, will increase by 8% from 2011 to 2020. The Breakthrough Institute also runs some numbers.  See Reuters as well.

Given Merkel's penchant for blowing with the political winds and the German public's Wutbürger politics, we should expect German energy policies to continue to be anything but stable.  Germany's energy policies have gone from potentially world-leading to incoherent in the blink of an eye. But perhaps part of the problem here is the tendency for analysts, me included, to see short-term change without fully appreciating the larger context. German democracy may presently be incapable of implementing a sensible energy policy. Regardless of Germany's domestic politics, its efforts to rapidly ramp up renewables -- if they actually stick as policies -- will nonetheless provide a worthwhile laboratory for what is technologically possible, and thus bears close watching.

Looking at the big picture, the question now I suppose is how long must we wait until the next German energy policy U-turn?
Posted by Roger Pielke, Jr. at 6/02/2011 09:14:00 AM
Email ThisBlogThis!Share to TwitterShare to FacebookShare to Pinterest
Newer Post Older Post Home