AIR-Worldwide has released an interesting top-10 list of the largest U.S. insured hurricane losses if each historical hurricane had occurred with 2009 exposures. Here are those values: 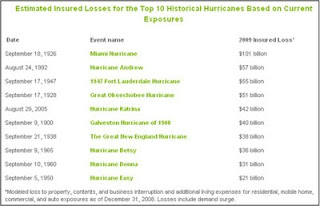 And here is a similar list of top-10 total damaging storms in the Pielke et al. 2008 (PDF) database as updated to 2009 values in the ICAT Damage Estimator:

There are 8 storms that overlap in the two lists, which we should expect to be different for several reasons. First the AIR-Worldwide list is insured damage and ours is total damage. Second, their list includes business interruption and demand surge and ours does not. This being the case, the AIR-Worldwide list has prompted us to take a second look at the 1947 Fort Lauderdale storm, which has losses that may be underestimated in the NHC database. It appears as 22nd in our 2009 list with an adjusted $16.4B in total losses.

Soon I'll take a look at the AIR-Worldwide earthquake list and see how that compares to our normalized earthquake losses (here in PDF).
Posted by Roger Pielke, Jr. at 11/17/2009 09:20:00 PM
Email ThisBlogThis!Share to TwitterShare to FacebookShare to Pinterest
Newer Post Older Post Home