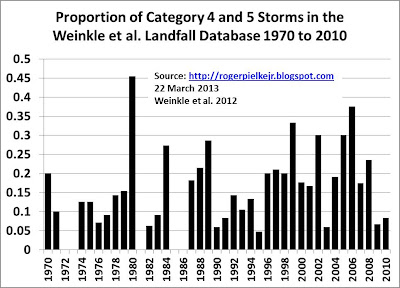 NOTE: This post has been updated, based on suggestions made by HowardW in the comments, and to correct an error on my part.

In a paper just out in the journal Climate Dynamics Holland and Bruyère (HB13) claim to have found a signal of greenhouse gas emissions on global tropical cyclone behavior. They use data from Weinkle et al. 2012 -- our recent paper on global landfalls -- as part of this argument. They write:


Weinkle et al. (2012) examined the global number of hurricanes that actually make landfall in each of the Saffir–Simpson categories. The proportion of Cat 4–5 at landfall to all landfall hurricanes in their data set has increased with ACCI [Anthropogenic Climate Change Index -- a measure of global temperature increase] at a rate of  ~21 % per C (p < 0.01).

Setting aside issues of data uncertainty for classification of storms, I was skeptical about their finding off of our data because -- as you can see in the graph above from our dataset -- there is not an obvious signal in proportion of global Category 4 and 5 landfalls 1970 to 2010. The presence of any multi-decadal trend in this metric (significant or not) is very sensitive to start and end date. Urged on by a persistent but ultimately helpful commenter on this blog, I can report that I am able to replicate this finding and it is . . . interesting. (Note that the following discussion focuses only on the claims of HB13 related to Weinkle et al. 2012, but that is plenty enough for me.)

HB13 explain of their methodology:


For the global hurricane analysis we choose to focus on the slightly shorter period from 1975 to 2010, as this is a reasonably homogeneous period of global satellite data . . .

We bin all hurricanes into the five Saffir–Simpson categories and take annual proportions of each relative to the total number of hurricanes. These are smoothed with a 5-year running mean to remove short-term variability. . .

So I followed this procedure and produced the following graph of the smoothed data for the period 1975 to 2010 with trend taken, as described in the paper, and shown in red along with the linear regression equation. 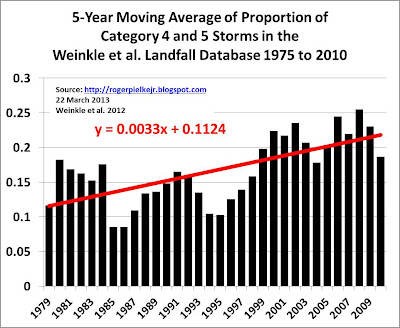 Applying the linear regression shown in the graph above over the 35 years of data, the proportion of Category 4 and 5 hurricanes increases at a rate of 0.33% per year (from the regression equation).

The metric that HB13 report is percentage increase in proportion per degree Celsius global temperature change. Global temperatures have increased by approximately 0.5-0.6 degrees C from the late 1970s to the late 2010s (I do not have the precise values of their ACCI, but this value is consistent with HB13 Figure 2a, 6a and also this dataset).

I will leave it as an exercise for the reader to offer a critique of methods or interpretation of the results. For my part, I do not find the analysis compelling. But it is interesting!
Posted by Roger Pielke, Jr. at 3/21/2013 07:56:00 PM
Email ThisBlogThis!Share to TwitterShare to FacebookShare to Pinterest
Newer Post Older Post Home