Beyond Manna from Heaven

Writing at The Breakthrough Journal blog, Ted Nordhaus and Michael Shellenberger argue that conventional economics is not up to the task of offering sound policy advice for the 21st century.  They write

In the 70 years that have passed since Joseph Schumpeter coined the term "creative destruction," economists have struggled awkwardly with how to think about growth and innovation. Born of the low-growth agricultural economies of 18th Century Europe, the dismal science to this day remains focused on the question of how to most efficiently distribute scarce resources, not on how to create new ones -- this despite two centuries of rapid economic growth driven by disruptive technologies, from the steam engine to electricity to the Internet.

There are some important, if qualified, exceptions. Sixty years ago, Nobelist Robert Solow and colleagues calculated that more than 80 percent of long-term growth derives from technological change. But neither Solow nor most other economists offered much explanation beyond that. Technological change was, in the words of one of Solow's contemporaries, "manna from heaven."

Where does that "manna from heaven" originate? In pricing incentives, of course, derived from economic theory. But once you take a closer look at both practice and the theoretical origins, you find that economics explains far less than we've been led to believe.

Nordhaus and Shellenberger revisit the climate issue to illustrate how far conventional economics has led us astray. They provide an overview of a debate that they engaged in with an economist from the Environmental Defense Fund, Gernot Wagner, who argues against evidence and common sense that by creating the right pricing incentives, drastic emissions reductions goals can be met in the near term:


"[W]e can achieve US emissions reduction goals for 2020 and possibly even 2030 through deployment of existing technologies. . . Price goes up, demand goes down. Economists typically call it the 'law of demand'--one of the very few laws we've got."

The theory is sound, its application is not -- a point that readers of this blog and The Climate Fix will well understand.

The good news is that many are beginning to move beyond the precepts of economic theory and take a look at the simple mathematics of the real world. For instance,  Ulrich Hoffmann, an economist at the UN Conference on Trade and Development, has done the math, which is illustrated in the figure below showing how much the world would need to decarbonize its economic activity in order to stabilize carbon dioxide at 450 ppm.

Based on these straightforward mathematics he concludes (Hoffmann has a more in-depth analysis here in PDF):


The arithmetic of economic and population growth, efficiency limits related to the rebound effect, as well as systemic issues call into question the hopes of decoupling economic growth from GHG growth. One should not deceive oneself into believing that such an evolutionary (and often reductionist) approach would be sufficient to cope with the complexities of climate change. “Green growth” proponents need to scrutinise the historical macro- (not micro-) economic evidence, in particular the arithmetic of economic and population growth, as well as the significant influence of the rebound effect.

Such messages are not well-received by conventional economists. In their exchange, Wagner explains to Nordhaus and Shellenberger that economic theory trumps real world evidence, and this means that debate over such issues is not necessary:


The main points from climate economics are no longer up for debate: carbon is a pollutant; we need make polluters pay, either through a cap or a price. Virtually all economists agree--from Holtz-Eakin, Laffer and Mankiw on one side to Stiglitz, Sachs, and Krugman on the other.

Once again, this one is not up for debate. You can argue that politically we can't get there, so we need to do other things in the short term, but it's not up for debate whether this is the economically correct solution.

Like most debates on climate this one ends predictably, with Wagner appealing to the motives of Shellenberger and Nordhaus:


[Y]our entire operation seems to be geared toward propagating contrarian-sounding views that once in a while get you some attention and get picked up by an editor somewhere, but otherwise are just that: contrarian for the sake of wanting to be different from the pack

Snore. But the larger point here is that there are articles of faith in the discipline of economics which are viewed as taboo to challenge, even when they fail to represent themselves in practice with the simplicity and elegance of theory.

However, a closer look at economic theory finds a much shakier foundation than is represented within the discipline. Writing at Slate, Konstantin Kakaes has a great piece that sums up how economics went astray when it comes to innovation: 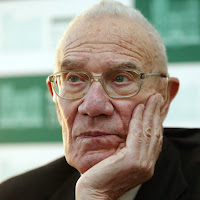 Robert Solow, winner of the 1987 Nobel Memorial Prize in Economic Sciences, is famous for, in the recent words of a high-ranking State Department official, “showing that technological innovation was responsible for over 80 percent of economic growth in the United States between 1909 and 1949.”. . Typically, technical or technological progress isn’t explicitly defined by those invoking Solow, but people take it to mean new gadgets.

Instead of "technology" Solow was really talking about "innovation." That innovation need not be understood because it was "manna from heaven" is characteristic of many arguments from conventional economists and is particularly endemic in the climate debate. From such a perspective, of course anyone asking about where innovation comes from -- other than from the magic of the invisible hand -- must either be ignorant or malign.

But as Hoffmann's essay explains, once you actually do the math of energy innovation in the context of real-world social and political forces, you see that understanding processes of innovation requires more than simply understanding the "law of demand."


The cautionary tale of Solow is emblematic of how economists get science and technology wrong. One economist creates a highly idealized mathematical model. The model’s creator is, as Solow was, honest about its limitations. But it quickly gets passed through the mill and acquires authority by means of citation. A few years after Solow’s paper came out, Kenneth Arrow, another Nobel Prize winner, would write that Solow proved the “overwhelming importance [of technological change in economic growth] relative to capital formation.” It’s a sort of idea laundering: Solow said that we don’t know where growth in economic output comes from and, for want of a better alternative, termed that missing information “technical change.” But his admission of ignorance morphed into a supposed proof that new technologies drive economic growth.

Remarkably, in the 21st century, our policy debates reflect the fact that we do not have a good idea where innovation comes from, how it is directed and how we prepare for its inevitable downsides. Too often conventional economics presents an an obstacle to debating and discussing this topic.

As Nordhaus and Shellenberger conclude,


Over the next century, global energy demand will double, and perhaps triple. But even were energy consumption to stay flat, significantly reducing emissions from today's levels will require the creation of disruptive new technologies. It's a task for which a doctrine focused on the efficient allocation of scarce resources could hardly be more ill-suited.

Read the three essays discussed here in full at The Breakthrough Journal blog, at Bridges Trade BioRes review, and at Slate.
Posted by Roger Pielke, Jr. at 5/21/2012 09:24:00 AM
Email ThisBlogThis!Share to TwitterShare to FacebookShare to Pinterest
Newer Post Older Post Home