Matt Ridley, The Rational Optimist, has posted up a forthcoming op-ed on UK energy policy.  It lays out the choices faced by UK policy makers in stark fashion.  In the piece, he quotes Jesse Ausubel:


Jesse Ausubel is a soft-spoken academic ecologist at Rockefeller University in New York, not given to hyperbole. So when I asked him about the future of gas, I was surprised by the strength of his reply. “It’s unstoppable,” he says simply. Gas, he says, will be the world’s dominant fuel for most of the next century. Coal and renewables will have to give way, while oil is used mainly for transport. Even nuclear may have to wait in the wings.

And he is not even talking mainly about shale gas. He reckons a still bigger story is waiting to be told about offshore gas from the so-called cold seeps around the continental margins. Israel has made a huge find and is planning a pipeline to Greece, to the irritation of the Turks. The Brazilians are striking rich. The Gulf of Guinea is hot. Even our own Rockall Bank looks promising. Ausubel thinks that much of this gas is not even “fossil” fuel, but ancient methane from the universe that was trapped deep in the earth’s rocks – like the methane that forms lakes on Titan, one of Saturn’s moons.

Ausubel was profiled in the NYT earlier this year:


He was involved in planning the first Intergovernmental Panel on Climate Change meeting but has viewed the panel’s subsequent reports with reserve. Climate change went from being a small to a major issue. “And then the expected happened,” he said. “Opportunists flowed in. By 1992 I stopped wanting to go to climate meetings.”

Natural gas isn't the only thing Ausubel was 20 years ahead of his time on!

Are we now entering a natural gas renaissance? Many people I come across seem to think so and few are willing to make the case that we are not.  I don't think that the answer to this question will be resolved by debate, but by what happens in the marketplace.  And there we find strong indications as well. 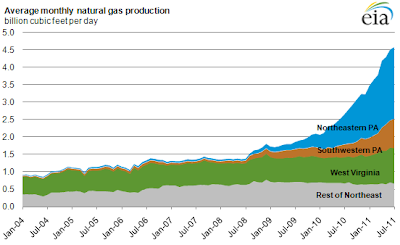