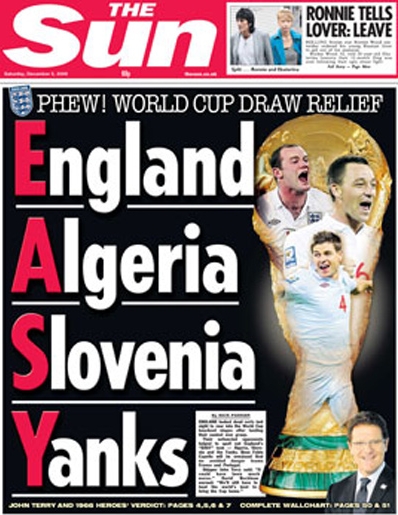 Simon Kuper comments today on the apparent fading dominance of Western Europe in the World Cup:

It might sound hasty to proclaim the fall of Europe 10 days into the World Cup. It might even sound like the pundits who wrote off Barack Obama 10 days into his presidency. It might be that England will meet Germany in the World Cup final. So let me get in my argument quickly, before the facts jump up and bite it in the ankle in the manner of Gabriel Heinze, the Argentine left back.

Up till now, the big five European countries - Germany, England, Italy, France and Spain - have completed nine games in total. They have won one: Germany's dismantling of Australia. Other than that match, the Big Five have scored three times in eight games. They have also lost three times: Spain to Switzerland, Germany to Serbia, and France to Mexico.

These tallies are more dramatic than they sound. In the last World Cup, the only time a western European team lost to a team from another region was Switzerland's defeat by Ukraine on penalties. True, that World Cup was played in Europe, but in South Africa the climate and time zone are European.

In other words, don't blame England. Blame the region they represent. western Europe has just 5 per cent of the world's population, yet from 1966 to 2006 it won a majority of World Cups.

But as this column has argued ad nauseam, the rest of the world is catching up. Bob Bradley, the American coach, is always sniffing around Barcelona and Milan. Switzerland, never previously much interested in football, in the 1990s aped the French system of performance centres for kids. Now they can bore Spain into submission. Algeria's players have learnt dull western European tactics playing at middling western European clubs.

Expecting England to whip Algeria or the US is like expecting the return of the British empire. Yet fans expect it nonetheless. Football supporters should revise their expectations. Here's how to look at it: plucky England held the mighty US and nearly beat Algeria. Moreover, it could be worse: look at France.

In related news, Nate Silver's magical prediction formula suggests that the odds are against each of England, Germany, France and Spain to advance, as below: