Early Appearance of TCF in the MSM 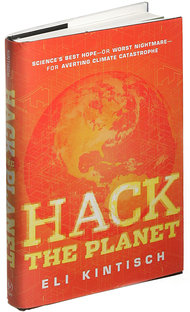 The Climate Fix got a brief mention in a review of books on geoengineering which appeared in the New York Times yesterday. The review provided a few suggestive quotes from the book:

Still, if geoengineering is not yet an idea whose time has come, it is definitely gaining traction. It is discussed in . . . forthcoming book, “The Climate Fix,” by Roger Pielke Jr., a professor of environmental studies at the University of Colorado. . .

In his discussion of geoengineering in “The Climate Fix,” Dr. Pielke argues that research into geoengineering techniques could advance scientists’ understanding of the action of Earth’s climate. But if the techniques are put into effect, “unintended consequences are certain,” he writes, adding “there is no practice planet earth on which such technologies can be implemented, evaluated, and improved.”

His book will be published in the fall.

Of course, geoengineering is but one of the areas that I discuss in the book. If you want a more comprehensive discussion of geoengineering, then have a look at Hack the Planet, by Eli Kintisch, which is discussed in the NYT review and is pictured above.
Posted by Roger Pielke, Jr. at 6/30/2010 03:32:00 PM
Email ThisBlogThis!Share to TwitterShare to FacebookShare to Pinterest
Newer Post Older Post Home