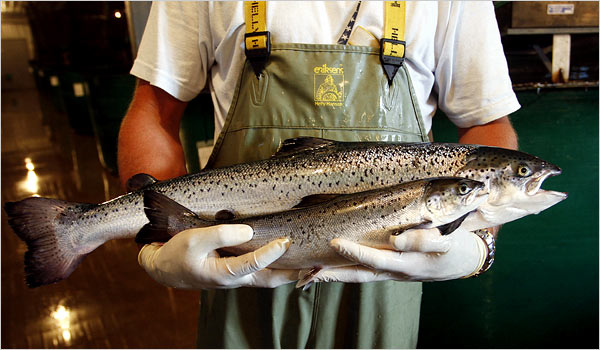 Often, decision makers have questions that can be resolved through science.  In such instances, they typically do not want scientists to tell them what action to take, but rather to render a judgment on the scientific questions.  In The Honest Broker, I call this process "science arbitration."  It is not the only role for scientists in the political process, but a critically important one.  It is also a situation where scientists might wish to take a step back from policy advocacy.

Science arbitration is on display this week at the Food and Drug Administration, where the agency is grappling with issues associated with genetically modified salmon.  The Washington Post describes the context:


[A] panel of experts convened by the Food and Drug Administration, . . . is poised to make a landmark decision that could mark a turning point in the way American food is produced.

AquaBounty, the company seeking permission to market the fish in the United States, wants to incubate genetically modified eggs in Prince Edward Island, Canada, then ship them in plastic coolers to Panama. There they would be raised in land-based tanks and eventually processed before being transported to the United States for sale.

In developing its fish, AquaBounty took an Atlantic salmon and inserted a growth hormone gene from a Chinook salmon as well as an "antifreeze" gene from the ocean pout, a large, eel-like species. The result is a genetically modified fish that can grow to market size in 18 months instead of three years, according to AquaBounty. That means farmers can speed production and increase yields, the company said.

The advisory panel did not vote on the matter, but individual members offered a range of comments - sometimes conflicting - after two days of testimony from AquaBounty, the FDA and the public.

Why didn't the advisory panel actually vote on the matter?  Wouldn't be important to actually hear what the scientific experts recommend related to regulation?  Is the diversity of views harmful to policy making?

Actually, the answer to the to the last two questions is No.

The advisory committee -- called the Veterinary Medicine Advisory Committee -- is empaneled to provide scientific and technical  advice.  Here is how the background document to the meeting explains the role of the committee:


The VMAC is composed of members in technical specialties necessary to provide recommendations on the scientific and technical issues before the Center.

The committee is not comprised of experts to provide guidance on regulatory or policy matters. Its function is to arbitrate scientific and technical questions.  The FDA faces a number of decisions related to the scientific and technical questions, such as how to label the product and whether or not to approve it.  Science can inform but does not determine the outcomes of these decisions.

Because science plays an important role in the FDA decision making process, significant effort is made to ensure the legitimacy and credibility of the advisory process:


Members [of the VMAC] are thoroughly vetted to determine whether they have conflicts of interest with the matter before the Committee. As part of that process, members are required to provide detailed information to permit evaluation of possible sources of conflict of interest. . .

Scientific members of the Committee are generally technically qualified experts in their field (e.g., veterinary medicine, animal science, microbiology, biostatistics, and food sciences) and have experience interpreting complex data in a public health context. In addition, the VMAC contains one member representing consumer groups. . .
In the case of the AA Salmon, CVM determined that additional technical expertise was needed to address the issues presented by genetic engineering and the specific issues associated with salmon in general. Additional members have been added to the Committee on an ad hoc basis,  to address expertise in molecular biology and the production of GE animals, and issues associated with Atlantic salmon, and salmonids in general.

The importance of advisory panel composition and conflict of interest is not unique to FDA, and is fairly standard in most high-level processes of scientific advice.  In this case, the scientific experts on the committee presented a range of opinions on genetically modified salmon:


A number of the panelists raised concerns about the fast-growing fish, saying there was not enough data to answer key questions about allergens and other potential risks.

"There are questions that have not been answered by the data that has been presented," said panelist James McKean, a veterinarian and professor at Iowa State University.

But other panel members argued there was no difference between the altered salmon and its natural counterpart.

"I would not feel alarmed about eating this kind of fish," said Gary Thorgaard, a professor and fish researcher at Washington State University.

Such diversity of views is a characteristic of a healthy process of science arbitration.  The messy reality is that on many issues -- especially those at the leading edge of science and policy -- uncertainties and ignorance abound.  Policy making is best served with a clear-eyed view of these unknowns.  As we will see in the case of GM salmon, such unknowns will present no obstacle to the FDA making definitive decisions (one way or the other) on this issue.

There is no shortage of advocates for and against GM salmon, including members of the scientific community.  Such advocacy is an important part of democratic processes.  Sometimes however, decision makers would benefit from experts who render judgments not on what to do, but on what the science says about particular questions related to risks and uncertainties.  A formal process of science arbitration helps to distinguish between advice and decision making, which serves not only policy making, but democratic politics as well, as it is the decision makers who are ultimately accountable to the public for their decisions, not the experts that they rely on to provide advice.
Posted by Roger Pielke, Jr. at 9/21/2010 08:40:00 AM
Email ThisBlogThis!Share to TwitterShare to FacebookShare to Pinterest
Newer Post Older Post Home