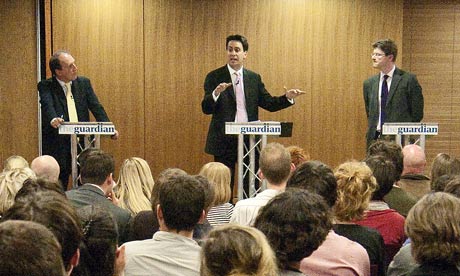 Last night the would-be energy ministers from the three UK political parties participated in a debate organized by The Guardian. During the debate a question was asked about the feasibility of meeting the short-term targets in the UK Climate Change Act. The question was posed as follows (you can hear excerpts from the debate here, the question is posed just after 14:30):

Academic research has shown that for the UK to meet the emissions reductions targets implied by the 2008 Climate Change Act would require an effort the equivalent of 30 new nuclear power plants by 2015, just to get part way to the target. Clearly this is not going to happen.

Ed Miliband, the Labor secretary of state for energy and climate change (in the center of the above photo), responded first by saying that he disputes my figures. My figures can easily be checked because they have been published in the peer-reviewed literature:

Just because they are published doesn't make them right, but it does not mean that they should be cavalierly dismissed either. I am certain that they are correct. Anyone with a line to Miliband is asked to request from him the details of his objection to these figures, and should a reply ever be forthcoming, I'll post it up here.

In fact, thanks to the Guardian, you can easily confirm that they are correct as well. The Guardian has put online a nifty carbon calculator for the UK, which allows one to play around with assumptions to try to reach the short term target. A reduction of 15% from today is equivalent to the 2020 target of a 34% reduction from 1990.

Using the calculator, you can get to the 2020 target by eliminating all 20 coal-fired power plants and an additional 30 natural gas power plants. To balance energy supply and demand these would have to be replaced by carbon-free generation. So, when I say that the level of effort is equivalent to 30 1GW nuclear power plants to get only part way to the short-term target, you can easily see that number is correct using the online calculator (how very cool). Spreading that level of effort around many sectors of the economy does not make the magnitude of the task any smaller, and arguably makes it more complex.

On this issue, Ed Miliband is simply wrong. His opponents in the debate, however, did not seem any better on the substance. Whoever inherits or retains the job of energy minister is eventually going to have to deal with the failure of the Climate Change Act. Denying the figures will only work for so long.
Posted by Roger Pielke, Jr. at 4/22/2010 07:52:00 AM
Email ThisBlogThis!Share to TwitterShare to FacebookShare to Pinterest
Newer Post Older Post Home