China’s rapid consumption growth is good news for the whole world. For the fir 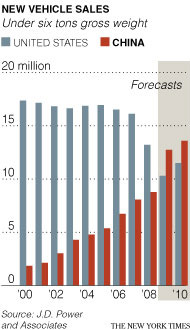 st time, China, not the United States, is a locomotive helping to pull the global economy out of a slump. But China’s tiny appetite for American exports means that the main benefit has gone to commodity exporters and to businesses in China.

Automakers are on track to sell 12.8 million cars and light trucks in China this year, virtually all of them made in China (although many are foreign brands), compared with 10.3 million in the United States. Appliance manufacturers expect to sell 185 million refrigerators, washing machines and other pieces of kitchen and laundry equipment in China this year, compared with 137 million in the American market.

Retail sales are growing 17 percent a year in China after adjusting for inflation, almost twice as fast as the overall economy.

It is hard to reconcile claims that China has already transformed its economy to one of low-carbon growth with reports like this:

But in some sectors, Chinese buyers are already proving more lavish than Americans. The average flat-panel television sold in China is bigger than in the United States, according to AU Optronics of Taiwan, the world’s third-largest manufacturer of flat-panel televisions.

When car sales began surging early this year, many auto executives attributed the boom to government incentives. To stimulate the economy, the government has offered rebates for rural families to buy cars and household appliances, and has cut sales taxes on cars with small engines.

But the boom has broadened to categories that barely qualify for incentives.

S.U.V. sales rose 72 percent in October from a year earlier. At Nissan, sales of cars with larger engines that do not qualify for the sales tax reduction are growing even faster than sales of small-engine cars.

China’s consumers have the potential to buy even more in the years ahead. The savings rate is close to 40 percent — and will remain high unless and until Beijing creates a social safety net for things like health care or retirement, which would encourage Chinese to spend more today.

And though annual incomes still average just $2,775 a person in cities and $840 in rural areas, Western economists predict the economy will grow almost 12 percent in each of the next two years and the renminbi is widely expected to appreciate someday, further increasing consumers’ buying power.