The Socolow/Pacala "wedges" are back.  Andy Revkin has a round-up of views (here and here) on a new paper by Robert Socolow which is oddly titled "Wedges Reaffirmed."  I say that the title is odd because the wedge analysis was analytically wrong when first published and just as wrong today, which is the general view of the responses collected by Revkin as well.

You can see that the wedges were wrong in the new diagram provided by Socolow with his new paper.  Here it is: 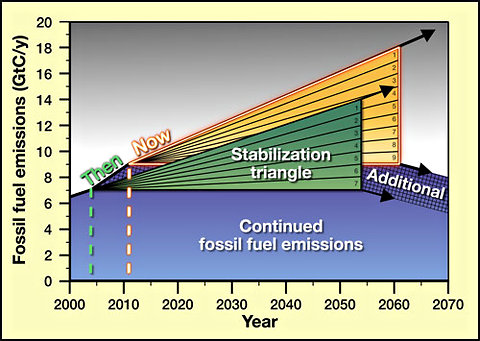 Notice how the slope of the line under the "Then" is greater than the slope under the "Now" or the hypotenuse of the green triangle. The reason for that is that the growth in emissions has been considerably faster than the BAU assumptions of the "wedges" analysis, which serves to assume away many more "wedges" of emissions reduction that are actually necessary to hold emissions to present-day levels. Readers of The Climate Fix will find the graph above affirming, but perhaps not in the same way implied by Socolow.

Another interesting note:  it appears that in the new analysis Socolow has actually reduced his projected emissions growth from the 1.5% per year used in the 2004 paper with Pacala to closer to 1.3% per year illustrated in the graph above. At this rate of increase in spontaneous decarbonization emissions will be stabilized by the 8th iteration of the wedges analysis ;-)

Along with several others -- including Ken Caldeira, Chris Green, Michael Levi, David Victor -- I have some extensive comments on the new paper from a Revkin email exchange which Revkin reproduces at his blog here.
Posted by Roger Pielke, Jr. at 9/27/2011 05:56:00 PM
Email ThisBlogThis!Share to TwitterShare to FacebookShare to Pinterest
Newer Post Older Post Home