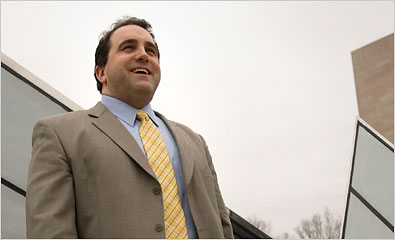 Scientist-turned -filmmaker Randy Olson has posted a two-part (one, two) interview that he conducted with Marc Morano. Here is an excerpt:

RO: Okay, so let’s start with this — do you have doubts about President Obama’s birth certificate?

RO: Would you vote for Sarah Palin for president?

MM: [laughter] Why would it matter who I would vote for? I don’t think it’s relevant, but I would say this, for people who think I’m this big G.O.P. operative, I’ve only voted for two Republican presidential candidates since I became of legal age to vote in 1988.

RO: Are you an anti-evolutionist?

MM: Haha, not at all. In fact, you know it’s not an issue. The implication of your question is that somehow the skeptics are aligned with creationists. In all my years of dealing with Senator Inhofe the subject of creationism and evolution never even came up. Someone even did an analysis of it in our scientists report, and I think they may have only found one or two creationists out of 700-some names.

Morano might want to check out today's New York Times on that last point. But if Morano isn't a creationist, but other skeptics are, and Morano doesn't typically vote Republican, but many skeptics do, are we introducing a sort of willful intellectual poverty into the debate over climate change by the practice of collapsing everything into two sides?

No, he’s not overwhelmingly charismatic, but he’s a whole lot better than all these climate folks that have tried to take their swings against him. Does anybody remember long ago when Muhammed Ali was climbing his way to the top? One chump and after another would enter the ring and go home battered. This feels similar.