In the UK there is a battle brewing over a scientific trial involving genetically modified wheat. Last weekend a protester attempted to vandalize the trial, and a larger civil action is expected on May 27.  The ongoing battle, and its close cousin in the climate wars, tell us something about what can happen to science when it becomes the central battleground over politics and technology. Unfortunately, the scientific community itself has contributed to such tactics.

A Nature editorial explains what is going on:

Plant scientists at Rothamsted Research, a complex of buildings and fields in Hertfordshire, UK, that prides itself on being the longest-running agricultural research station in the world, have spent years preparing for their latest experiment — which will attempt to prove the usefulness of a genetically modified (GM) wheat that emits an aphid alarm pheromone, potentially reducing aphid infestation.

Yet instead of looking forward to watching their crop grow, the Rothamsted scientists are nervously counting the days until 27 May, when protesters against GM crops have promised to turn up in force and destroy the experimental plots.

The protest group, it must be acknowledged, has a great name — Take the Flour Back. And it no doubt believes that it has the sympathy of the public. The reputation of GM crops and food in Britain, and in much of mainland Europe, has yet to recover from the battering it took in the late 1990s. In Germany, the routine destruction of crops by protesters has meant that scientists there simply don't bother to conduct GM experiments any more.

The Rothamsted scientists have also attempted to win over the public, with a media campaign that explains what they are trying to do and why. After the protesters announced their plans to “decontaminate” the research site, the scientists tried to engage with their opponents, and pleaded with them to “reconsider before it is too late, and before years of work to which we have devoted our lives are destroyed forever”. The researchers say that in this case they are the true environmentalists. The modified crop, if it works, would lower the demand for environmentally damaging insecticides.

It would be a mistake to conclude that the protesters are in some way anti-science or fearful that the genetically modified crops might fail to work as advertised (though surely some protesters do have these views). Their main concern is that the crops will perform exactly as advertised, and lead to further gains in agricultural productivity.

It is not science that they fear, but the implications of scientific advances for economic and political outcomes. The organization leading the UK protests calls itself Take the Flour Back, and clearly explains its rationale as follows:


Our current political system chooses to deal with world hunger through the model of “food security”, arguing that there is not enough food to go around and that we need techno-fixes to solve this. This approach ignores the fact that there is a global food surplus – many people just can’t afford to buy food. This problem is being amplified by land grabs- communities that used to grow food for themselves are being forced out of their ancestral homes, often by corporations expanding cash crop production.

The industrial food system throws away (in the journey from farms to traders, food processors and supermarkets), between a third and a half of all the food that it produces – enough to feed the world’s hungry six times over. (2)

Free trade policies imposed by the International Monetary Fund make it much harder for governments to protect small and family farmers from big multinationals. With the expansion of free-market capitalism, agricultural systems in many countries in the global south have become focused on producing cash crops for export to rich western nations. At the same time, their markets have been opened to food imports, including imports from US and EU companies at less than the cost of production. US farmers benefit from billions of dollars in subsidies which make up as much as 40% of US net farm income. This means they can afford to export their crops at well below production cost. (3) This is ruining the livelihoods of small farmers in the global south.

Like many issues where science and politics intersect, those opposed to the productivity gains made possible by agricultural innovation have sought to use science as a basis for realizing political ends. A primary strategy in such efforts is typically to argue that the science compels a particular political outcome.  In the case of GM crops, opponents of the technology (mainly in Europe) have argued that the techniques are unproven or risky. However, such tactics have not succeeded. So the next step beyond waging a political battle over science is now direct action against the technology of concern. 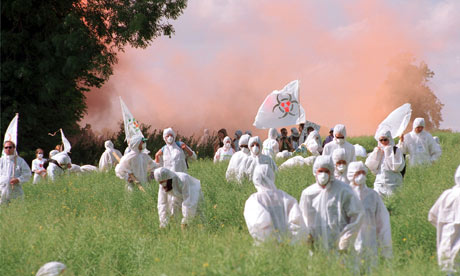 This situation is of course in many respects parallel to the climate debate. Efforts to compel emissions reductions through invocations that science compels certain political outcomes have borne little fruit, so some activists have taken it upon themselves to directly attack the technologies at the focus of their concern.

One difference between the climate wars and the GM wars is that some prominent scientists are participating in the direct action against technology (such as James Hansen and IPCC contributor Marc Jaccard). Another important difference is that in the case of GM crops, it is research itself being targeted, and the scientific community objects.

One argument invoked by scientists in support of GM technology is that the world needs more food. But the world needs more energy too. In condoning direct attacks on energy technologies, the scientific community may have opened the door to tactics that it does not much like when they are applied closer to home.
Posted by Roger Pielke, Jr. at 5/23/2012 04:07:00 AM
Email ThisBlogThis!Share to TwitterShare to FacebookShare to Pinterest
Newer Post Older Post Home