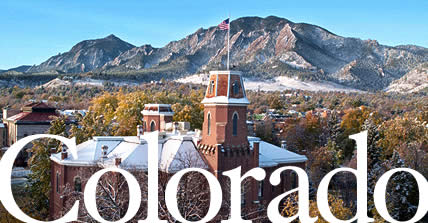 The Boulder Daily Camera reports today that the University of Colorado, where I teach, is proposing to change how it charges for in-state tuition with an implication being that by the 2014, academic year tuition for in-state student could increase by as much as 40% from the current rate.  The Camera writes:


The Boulder campus is looking to change the way it charges tuition.

Now, full-time students pay for 11.25 credit hours a semester at $341 apiece -- yet they can take up to 18 credits, or sometimes even more with campus approval.

Meantime, the Chronicle of Higher Education is reporting today that the public may be reaching its limits in its willingness to pay ever-increasing tuition bills for a college education: 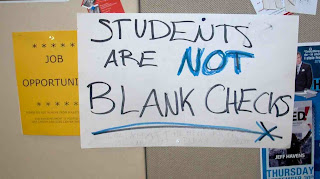 By now, in most industries, customers would have said, enough is enough. But along with health care, higher ed has enjoyed something no other sector in the U.S. economy can claim: Raise prices and people will go to almost any end, including huge amounts of debt, to pay the bill (well, maybe housing enjoyed that too, but we saw how that ended).

Colleges have been helped greatly by a blip in the birth rate 20 or so years ago, which meant there were three million more 18-to-24-year-olds in the population. That spike has now ended, and colleges are already dealing with the consequences, particularly in the Northeast. What’s more, many experts are predicting a nationwide drop in the number of affluent, well-prepared high-school graduates whose parents attended college, the types of students who propelled growth at so many institutions in recent years.

But beyond demographics, what has really helped sustain the anything-goes pricing model in higher ed is the so-called wage premium. The reason so many students want to go to college, and the reason so many families are willing to pay anything for it, is the lifetime payoff of a degree: A typical bachelor’s-degree recipient earns about 66 percent more than a high-school graduate during a 40-year career.

Although wages for college grads actually fell over the last decade, the wage premium is not going to disappear. Employers may disagree about what they want in their workers, but they do agree on one thing. “They want education,” says Anthony P. Carnevale of Georgetown University’s Center on Education and the Workforce.

So going to college is worth it, but going to any college at any price may no longer be worth it. About half of Americans think that the higher-education system is doing a poor or fair job in providing value for the money spent, according to a survey last spring by the Pew Research Center.

The Chronicle says that most university leaders are apparently unconcerned:


College presidents seem tone-deaf to those concerns. In a companion survey conducted with The Chronicle, three-fourths of college leaders said the system was providing a good or excellent value.

For some presidents, it’s easy to ignore public and political consternation over college prices. Their elite institutions can continue to charge almost anything because they enjoy so many qualified applicants that they can easily fill their freshman classes 10 times over.

For the vast majority of colleges, however, the time has come to prove their worth if they have any plans to continue the price increases of the past several years.

At state universities like Colorado, the problem is that the price tag on tuition does not reflect the costs of providing the degree. Historically, the difference between the price and the cost was made up by a subsidy provided by the state government. In Colorado, like many places, the amount of this subsidy has diminished dramatically.

But since bills have to be paid, the University makes up the lost subsidy by cutting costs, bringing in more out-of-states students (who are charged a premium) and raising the in-state tuition. This situation makes no one happy. For university employees they see austerity, at times severe, and for students and their parents they see a rising price tag on a college education. The austerity has, in some cases on campus, led to a diminishment in educational quality which exacerbates the frustrations all around.

Last year I proposed in the Chronicle of Higher Education that one way out of this situation would be to reform the in-state/out-of-state tuition distinction, and charge the market rate for tuition. The state subsidy, such as it is, would be given directly to in-state students (rather than to the campus). I discussed this proposal here and here and here and here and here.

I won't repeat the details of the proposal here, but such reform would close the budget gap, make the state contribution transparent to voters (and importantly parents and students) and create a culture of excellence that is presently at risk at the state's flagship university.

The current proposal to increase tuition by 40% or more by 2014 is a step in the direction of a levelized tuition. The university would be better off by simply embracing this reality, before the marketplace rejects a college education at any cost.
Posted by Roger Pielke, Jr. at 1/12/2012 07:52:00 AM
Email ThisBlogThis!Share to TwitterShare to FacebookShare to Pinterest
Newer Post Older Post Home