Julia Gillard Goes All In 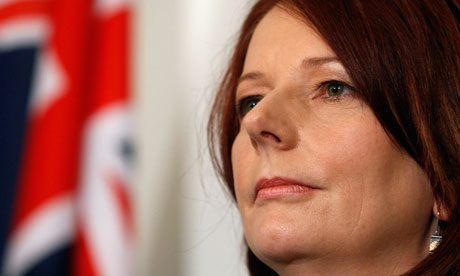 In the face of opinion polls showing a lack of support for her proposed carbon tax, Julia Gillard today has delivered a speech that indicates that she is willing to wager her future on this issue (The speech is here in PDF).  In the speech the word "carbon" appears 36 times, also appearing 36 times are the words "jobs" and "economy."

She makes clear that there is no going back:


The important thing to know is that from 1 July 2012, carbon will be priced in the Australian economy.

The journey of transformation will begin.

Friends, I chose action over inaction because of this simple truth:

If Australia does not adopt a carbon price in 2011, we probably never will.

This is the year of decision.

Setting Australia on the path to a high skill, low carbon future.

Or leaving our economy to decay into a rusting industrial museum.

That is the choice we face.

It is here where I think that Gillard has made a bad bet. Carbon pricing is supposed to create jobs by making fossil fuels appreciably more expensive, thereby creating a market signal that disfavors carbon-intensive industry and stimulates less carbon-intensive economic activity. The economic parts of theory seem sound enough.

However, it is the political realities that the theory does not account for.  Australia's economy is very carbon intensive (PDF). Thus, if carbon pricing were to work exactly as the Prime Minister describes, it will necessary lead to a great deal of economic dislocation and change -- Consider that to meet the 5% emissions reduction target (from 2000 levels), without relying on offsets or other tricks, implies that Australia's economy would need to become as carbon efficient as Japan's by the end of this decade. How such a profoundly disruptive transitional period would be managed is the one issue that advocates of a high carbon price have never really dealt with -- the market's invisible hand will take care of it I guess.

Gillard, also skips over that part:


We cannot afford to be stranded with an outdated high-emissions economy.

We can’t freeze our economy in time, any more than we could lock ourselves behind tariff walls while the world changed outside.

I don’t want us to wake up in ten years time lumbered with a high carbon economy when the rest of the world has moved on and then scramble to catch up.

Our nation is well equipped to make the transition.

We have an abundance of natural resources like wind, natural gas, solar and geothermal.

For example, the highest average solar radiation per square metre of any continent in the world.

We have an agile, innovative business sector tempered by three decades of exposure to global competition.

We have a talented workforce ready to embrace the jobs of tomorrow. . .

Inaction will also cost jobs because emission-intensive economies will become uncompetitive in a low carbon world.

In the quest for comparative advantage, investment will flow towards those countries that can offer more output for fewer emissions.

It means re-skilling workers for the future.

We will see new job opportunities in clean energy generation.

Today’s workers will find themselves in different industries and different settings.

Plumbers and electricians will be reskilled to install solar hot water systems and solar panels.

How does one become "reskilled"?  Without an explanation, many people will translate "reskilled" to mean "unemployed".  The oft-stated idea that the proceeds of a carbon tax will be used to compensate those who fact higher costs does not address the issue of dislocation in the economy. There is a element of "magical thinking" in the idea that transforming a national economy starts with a simple decision:


. . . clean energy will open up opportunities we are only just beginning to imagine.

Those opportunities begin with that simple but momentous decision: Putting a price on carbon.

Friends, a price on carbon is the cheapest way to drive investment and jobs.

There are only two realistic outcomes here. One is that the carbon tax proposal is scrapped. With this speech it seems highly unlikely that Gillard will be the one doing any scrapping.  So it would probably be via an election or a change in leadership, such as if Kevin Rudd becomes captain of the Brisbane Broncos. The second possible outcome is that the carbon pricing is watered down so far that its enactment allows Labor to claim success while limiting any actual impact from the tax on the economy.  Of course, that would undercut its stated purpose -- to transform the economy.

Either way, I do not see a good outcome here for Gillard or for carbon pricing.  A better strategy is the one proposed in The Climate Fix -- start with a very low carbon tax, one that is politically acceptable, and use the proceeds to invest in innovation. The carbon price would rise over time as the fruits of innovation make it politically acceptable to raise that price.  I expect that Australia will soon provide (yet aonpther) lesson in how not to try to put a price on carbon.
Posted by Roger Pielke, Jr. at 3/16/2011 10:33:00 AM
Email ThisBlogThis!Share to TwitterShare to FacebookShare to Pinterest
Newer Post Older Post Home