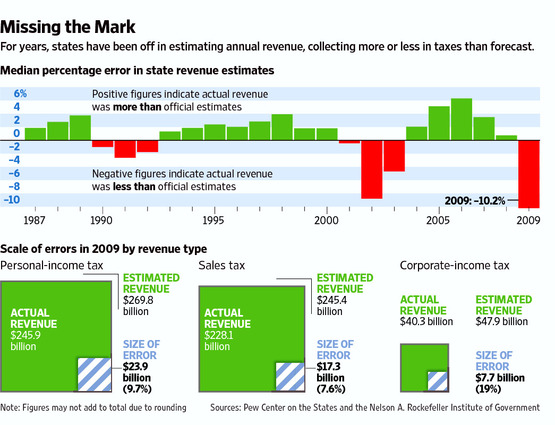 The WSJ reports on a study released by the Pew Center on the States on the accuracy of state budget revenue forecasts.  In short -- the forecasts are not so good:


In a report Tuesday, economists at the Pew Center on the States and the Nelson A. Rockefeller Institute of Government conclude that states increasingly overestimate their tax revenue during tough economic times. The report's authors calculate that during the depth of the latest recession in 2009, income forecasts by all 50 states overshot reality by a total $49 billion.

Forecasts that are predictably wrong can be just as useful as those that are predictably right.  The full report from Pew can be found here.
Posted by Roger Pielke, Jr. at 3/02/2011 11:33:00 PM
Email ThisBlogThis!Share to TwitterShare to FacebookShare to Pinterest
Newer Post Older Post Home