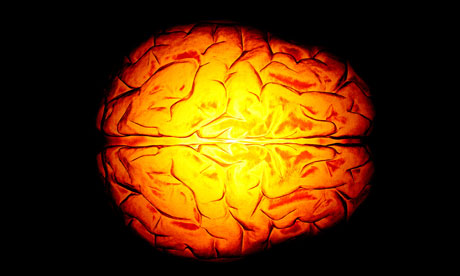 The Guardian has a blog post up by three neuroscientists decrying the state of hype in the media related to their field, which is fueled in part by their colleagues seeking "impact."  They write:


Anyone who has followed recent media reports that electrical brain stimulation "sparks bright ideas" or "unshackles the genius within" could be forgiven for believing that we stand on the frontier of a brave new world. As James Gallagher of the BBC put it, "Are we entering the era of the thinking cap – a device to supercharge our brains?"

The answer, we would suggest, is a categorical no. Such speculations begin and end in the colourful realm of science fiction. But we are also in danger of entering the era of the "neuro-myth", where neuroscientists sensationalise and distort their own findings in the name of publicity.

The tendency for scientists to over-egg the cake when dealing with the media is nothing new, but recent examples are striking in their disregard for accurate reporting to the public. We believe the media and academic community share a collective responsibility to prevent pseudoscience from masquerading as neuroscience.

Their analysis of why this happens has broad applicability.  They identify an . . .


. . . unacceptable gulf between, on the one hand, the evidence-bound conclusions reached in peer-reviewed scientific journals, and on the other, the heavy spin applied by scientists to achieve publicity in the media. Are we as neuroscientists so unskilled at communicating with the public, or so low in our estimation of the public's intelligence, that we see no alternative but to mislead and exaggerate?

Somewhere down the line, achieving an impact in the media seems to have become the goal in itself, rather than what it should be: a way to inform and engage the public with clarity and objectivity, without bias or prejudice.

Our obsession with impact is not one-sided. The craving of scientists for publicity is fuelled by a hurried and unquestioning media, an academic community that disproportionately rewards publication in "high impact" journals such as Nature, and by research councils that emphasise the importance of achieving "impact" while at the same time delivering funding cuts.

Academics are now pushed to attend media training courses, instructed about "pathways to impact", required to include detailed "impact summaries" when applying for grant funding, and constantly reminded about the importance of media engagement to further their careers.

Yet where in all of this strategising and careerism is it made clear why public engagement is important? Where is it emphasised that the most crucial consideration in our interactions with the media is that we are accurate, honest and open about the limitations of our research?

Neuroscience is not the only field where the cake is over-egged.
Posted by Roger Pielke, Jr. at 2/28/2011 05:16:00 PM
Email ThisBlogThis!Share to TwitterShare to FacebookShare to Pinterest
Newer Post Older Post Home