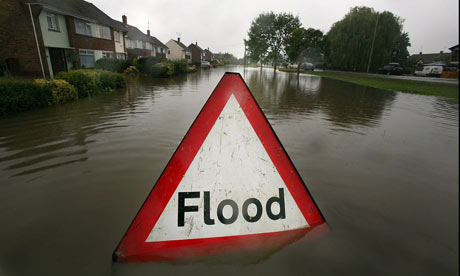 [UPDATE: Gavin Schmidt at Real Climate has a post on this subject that  -- surprise, surprise -- is perfectly consonant with what I write below.]

[UPDATE 2: Andy Revkin has a great post on the representations of the precipitation paper discussed below by scientists and related coverage by the media.]

Nature published two papers yesterday that discuss increasing precipitation trends and a 2000 flood in the UK.  I have been asked by many people whether these papers mean that we can now attribute some fraction of the global trend in disaster losses to greenhouse gas emissions, or even recent disasters such as in Pakistan and Australia.

I hate to pour cold water on a really good media frenzy, but the answer is "no."  Neither paper actually discusses global trends in disasters (one doesn't even discuss floods) or even individual events beyond a single flood event in the UK in 2000.  But still, can't we just connect the dots?  Isn't it just obvious?  And only deniers deny the obvious, right?

What seems obvious is sometime just wrong.  This of course is why we actually do research.  So why is it that we shouldn't make what seems to be an obvious connection between these papers and recent disasters, as so many have already done?

Here are some things to consider.

First, the Min et al. paper seeks to identify a GHG signal in global precipitation over the period 1950-1999.  They focus on one-day and five-day measures of precipitation.  They do not discuss streamflow or damage.  For many years, an upwards trend in precipitation has been documented, and attributed to GHGs, even back to the 1990s (I co-authored a paper on precipitation and floods in 1999 that assumed a human influence on precipitation, PDF), so I am unsure what is actually new in this paper's conclusions.

However, accepting that precipitation has increased and can be attributed in some part to GHG emissions, there have not been shown corresponding increases in streamflow (floods)  or damage. How can this be?  Think of it like this -- Precipitation is to flood damage as wind is to windstorm damage.  It is not enough to say that it has become windier to make a connection to increased windstorm damage -- you need to show a specific increase in those specific wind events that actually cause damage. There are a lot of days that could be windier with no increase in damage; the same goes for precipitation.

My understanding of the literature on streamflow is that there have not been shown increasing peak streamflow commensurate with increases in precipitation, and this is a robust finding across the literature.  For instance, one recent review concludes:


Floods are of great concern in many areas of the world, with the last decade seeing major fluvial events in, for example, Asia, Europe and North America. This has focused attention on whether or not these are a result of a changing climate. Rive flows calculated from outputs from global models often suggest that high river flows will increase in a warmer, future climate. However, the future projections are not necessarily in tune with the records collected so far – the observational evidence is more ambiguous. A recent study of trends in long time series of annual maximum river flows at 195 gauging stations worldwide suggests that the majority of these flow records (70%) do not exhibit any statistically significant trends. Trends in the remaining records are almost evenly split between having a positive and a negative direction.

Absent an increase in peak streamflows, it is impossible to connect the dots between increasing precipitation and increasing floods.  There are of course good reasons why a linkage between increasing precipitation and peak streamflow would be difficult to make, such as the seasonality of the increase in rain or snow, the large variability of flooding and the human influence on river systems.  Those difficulties of course translate directly to a difficulty in connecting the effects of increasing GHGs to flood disasters.

Second, the Pall et al. paper seeks to quantify the increased risk of a specific flood event in the UK in 2000 due to greenhouse gas emissions.  It applies a methodology that was previously used with respect to the 2003 European heatwave.

Taking the paper at face value, it clearly states that in England and Wales, there has not been an increasing trend in precipitation or floods.  Thus, floods in this region are not a contributor to the global increase in disaster costs.  Further, there has been no increase in Europe in normalized flood losses (PDF).  Thus, Pall et al. paper is focused attribution in the context of on a single event, and not trend detection in the region that it focuses on, much less any broader context.

More generally, the paper utilizes a seasonal forecast model to assess risk probabilities.  Given the performance of seasonal forecast models in actual prediction mode, I would expect many scientists to remain skeptical of this approach to attribution. Of course, if this group can show an improvement in the skill of actual seasonal forecasts by using greenhouse gas emissions as a predictor, they will have a very convincing case.  That is a high hurdle.

In short, the new studies are interesting and add to our knowledge.  But they do not change the state of knowledge related to trends in global disasters and how they might be related to greenhouse gases.  But even so, I expect that many will still want to connect the dots between greenhouse gas emissions and recent floods.  Connecting the dots is fun, but it is not science.
Posted by Roger Pielke, Jr. at 2/17/2011 06:41:00 AM
Email ThisBlogThis!Share to TwitterShare to FacebookShare to Pinterest
Newer Post Older Post Home