Was the "War on Poverty" a Success? Yes. 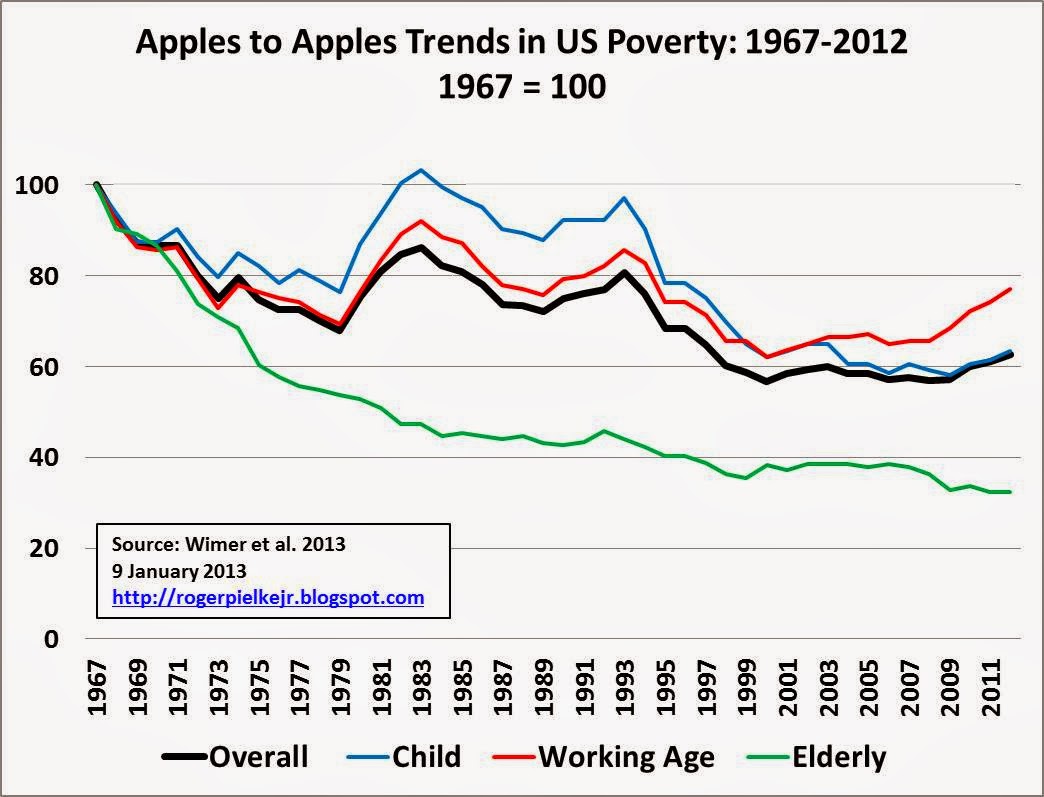 The graph above comes from a new paper by Christopher Wimer and colleagues at Columbia University (available here in PDF). The paper helps to address what is a surprisingly difficult question to answer: How has poverty changed over time?


Poverty measures set a poverty line or threshold and then evaluate resources against that threshold. The official poverty measure is flawed on both counts: it uses thresholds that are outdated and are not adjusted appropriately for the needs of different types of individuals and households; and it uses an incomplete measure of resources which fails to take into account the full range of income and expenses that individuals and households have. Because of these (and other) failings, statistics using the official poverty measure do not provide an accurate picture of poverty or the role of government policies in combating poverty.

Researchers and the government are well aware of the problems with and limitation inherent in the official poverty rate, such that they have developed alternative measures. Wimer and colleagues have used one of those alternative measures and used it as the basis for measuring poverty back in time -- called the supplemental poverty measure (SPM), which is calculated by the US Census Bureau. Think of their methodology as analogous to our normalized hurricane damage work -- it allows a better look at trends. The approach is simple and intuitive.

The supplemental rate can be a bit deceiving as in 2012 it looks a lot like the official poverty rate (OPR) -- the former was 16% in 2012 and the latter 15.1% -- ho, hum, so what? So what is that the SPM has only been measured for a few years, so until now it has not been useful as a measure of trends. Wimer et al. use the SPM, "anchored" to its 2012 values and then ask what the poverty rate would have been using this measure going back in time until 1967, the earliest year when data is available.

What they find is shown in the graph at the top of this post, which shows change in poverty rate (i.e., the proportion of people whose incomes fall beneath the anchored-SPM poverty threshold).  The overall poverty rate fell by almost 40% from 1967 to 2012. The poverty rate for children fell by a similar amount, for those of working-age the rate fell by 23% and for the elderly a remarkable 78%.

Whatever one thinks about the desirability of a "war on poverty" or the way that it has been implemented ideologically or politically, we should all be able to agree that the incidence of poverty -- as measured by the SPM -- has dropped dramatically since the 1960s.  A major explanation for the drop is government programs focused on the poor, as documented by Wimer et al..

Even though there remains considerable inequality and outright poverty (still 16% in 2012), as well as important debates on what "poverty" actually means, we can also look at the numbers and conclude that the "war on poverty" has been a success.

To read more, the Center on Budget and Policy Priorities has a nice discussion of the paper here and The Washington Post here,
Posted by Roger Pielke, Jr. at 1/09/2014 04:33:00 PM
Email ThisBlogThis!Share to TwitterShare to FacebookShare to Pinterest
Newer Post Older Post Home