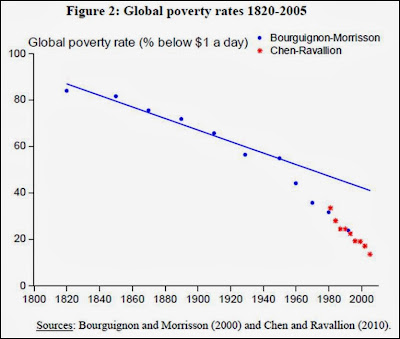 The figure above comes from a recent, excellent paper by Martin Ravallion, The Idea of Antipoverty Policy, which shows a dramatic acceleration in the reduction of global poverty since 1950,

Ravallion makes two observations based on the graph (of which he notes, "Neither observation has been made before to my knowledge"):


The middle of the 20th century saw a marked a turning point in progress against poverty globally. Figure 2 plots two series for the $1 a day poverty rate, from Bourguignon and Morrisson (2000) and Shaohua Chen and Ravallion (2010). There is a long list of data problems in these sources and their comparability. However, these are the best estimates we have, and the comparability problems are unlikely to alter two key observations from Figure 2: First, the incidence of extreme poverty in the world is lower now than ever before. While there have been calls to end extreme poverty at various times during the last century or so, they are surely now more credible than ever. Second, the time around 1950 saw a turning point, with significantly faster progress against extreme poverty.

The data are consistent with that which I posted up recently on the evolution of global income over the same time period which shows increasing income and greater income equality (relative historically) globally since 1820.

Ravillion adds a little flesh and blood to interpretation of the graph:


To assess the extent of the break in 1950, suppose that it had not occurred—that the pre-1950 trajectory had been maintained. We would then have expected to find that 36% (standard error =3.3%) of the world’s population lived below $1 a day in 2005, as compared to the Chen and Ravallion estimate of 14%. The difference implies that an extra 1.5 billion people would have lived in poverty by this measure if not for the break in trajectories around 1950.

That is a lot of people. Consider that there were only 2.6 billion people alive in 1950. The graph tells a global story, as Ravallion assumes that: "nobody lives below $1 a day in the developed countries after 1980. This is plausible, and is consistent with the Luxembourg Income Study data base (author’s calculations)." The data suggests a secular change in poverty rates in the middle of the 20th century, which long pre-dates the modern era of free(er) trade, technology-based globalization and global anti-poverty awareness.

We can perhaps gain a hint of why poverty reduction acceleration by looking at trend data on the size of the global economy.The dramatic decrease in this metric of poverty has been accompanied by a dramatic acceleration in global economic growth, as shown in the following graph (using data from DeLong 2006, here in PDF). 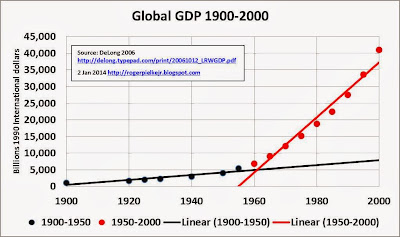 From 1950 to 2000, global GDP increased by about 800% while population increased by less than 300%. Growth appears to be a necessary, but not sufficient condition for reducing poverty. This was the conclusion of a 2011 report by the Brookings Institution, which examined the progress in meeting the UN's Millennium Development Goals, over the period 2005 to 2015 (here in PDF):


For many years, a debate raged amongst development academics, advocates and policymakers on the role of  growth in poverty reduction and development, with some suggesting issues such as inequality and redistribution merited greater attention. Today, the development community has thankfully largely moved beyond this debate, with a broad consensus rightfully asserting the role of growth at the center of poverty alleviation.

This analytical evolution has happily coincided with a period of rapid economic growth in the developing world, even despite the setback of the Great Recession. The new estimates of global poverty presented in this brief serve as a reminder of just how powerful high growth can be in freeing people from poverty.


[P]resent day thinking is both more optimistic about the prospects of eliminating absolute poverty through an expanding economy, and more cognizant of the conditionalities in the impact of growth on poverty. Under the right conditions, economic growth can be a powerful force against poverty.

A key question is, what are those right conditions for economic growth to be accompanied by, or even to contribute to, reducing the number of people in poverty? The experiences since 1950 provide some empirical evidence to address that question at the global scale.