The Politics and Economics of Manufacturing


The video above is of course the much discussed Super Bowl commercial from Chrysler featuring Clint Eastwood titled "Halftime in America" which celebrates manufacturing. The video does not note that Chrysler is now part of Fiat, an Italian company. The tension between the globalization of modern business and the symbolism of American manufacturing reflects the difference between viewing manufacturing from an economic perspective (i.e., as a NAICS categorization) and through a political lens (i.e., as a powerful image of American ideals). Many analysts conflate the two.

The aggregate number of people in the United States employed in manufacturing today is lower than at any time since before World War II, as shown in the graph below. This means that the only people who (as adults) have previously experienced a labor market of less than 12 million manufacturing workers are today 90 years old. Consider also that in 1948 there were only about 60 million people in the labor force, meaning that about 1 in 4 US jobs was in manufacturing and today that ratio is closer to 1 in 13. The US of course is not alone in seeing a decline in manufacturing jobs -- for instance, Germany's decline has been more pronounced.

Since about 1950 US manufacturing output has increased by more than 300% (in real terms) even as the sector has seen its role in the overall economy decrease from 27% to less than 12% (data from BEA, price deflators from OMB). By any economic measure, manufacturing occupies a less significant role in the US economy than it did several decades ago, and far less significant than what might today be deemed the 20th century golden age of manufacturing in the decades following World War II.

But it seems that politicians still see that golden age as having political benefits. Here is an excerpt from President Obama's FY 2012 budget (PDF):


Our challenge is not building a new satellite, but to rebuild our economy. If the recession has taught us anything, it is that we cannot go back to an economy driven by too much spending, too much borrowing, and the paper profits of financial speculation. We must rebuild on a new, stronger foundation for economic growth. We need to do what America has always been known for: building, innovating, and educating. We don’t want to be a nation that simply buys and consumes products from other countries. We want to create and sell products all over the world that are stamped with three simple words: “Made in America.”

The invocation of manufacturing's golden age is bipartisan, with Mitt Romney recently making a speech on a factory floor and promising to bring back manufacturing jobs.

The political appeal of manufacturing is largely symbolic. Consider that organized labor has declined dramatically, falling from 35% in the private sector in the 1950s to less than 7% last year.  The symbolic importance of manufacturing is reflected in an opinion poll taken by Deloitte in 2011 which found (here in PDF):


When asked which industries are most important to the national economy, manufacturing is near the top of the list, topped only by energy. Eighty-six percent indicate that America’s manufacturing base is “important” or “very important” to our standard of living. And when asked if they could create 1000 new jobs in their community with any new facility, manufacturing comes in at the top of the list – ahead of energy production facilities, technology development centers, retail centers, banks or financial institutions and a host of others. . . Seventy-nine percent of Americans believe a strong manufacturing base should be a national priority.

The poll also provided some evidence that the world has changed: 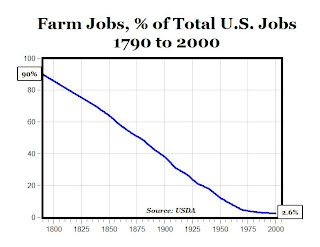 Over the past century, the US fought a losing battle against productivity gains in agriculture. The 1920s and 1930s were characterized by political debates on the plight of the American farmer, which are not so different than those of today focused on manufacturing. Price supports, tariffs, supply destroying policies, demand increasing policies, Food for War, crop subsidies, crop insurance and many other policies were unable to stop the inexorable march of innovation on agriculture. Today agriculture represents about 1% of the US economy and about 1 million jobs. Despite these declines -- far larger than those experienced by manufacturing -- no one is talking about revitalizing American farming.

Make no mistake -- both manufacturing and agriculture are essential parts of the US economy. However, if it is indeed "Halftime in America" we'd better be ready to come out of the locker room prepared to play a different game.