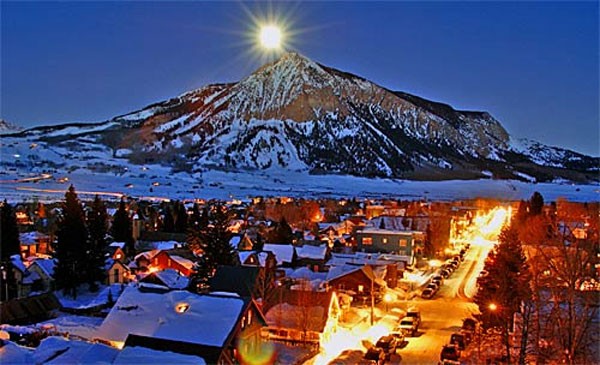 [NOTE: This is a guest post from Roger Hudson, Professor of Business, Western State College of Colorado.  The image above is Crested Butte, CO, a beautiful place in a beautiful state, and was chosen by me.  Thanks Professor Hudson! -RP]

In his blog about  decarbonizing the Colorado economy , Roger Pielke, Jr. said “the math here is not complicated.”  Last spring semester the undergraduate business students in my quantitative analysis class at Western State College and I tried it and found the math was indeed not very complicated.  After practicing with a few nations we moved on to states, where the math remained easy but data was not quite so readily available.  Then we moved to the front lines of climate policy, the local level, where millions of citizens are expected, or at least hoped, to dramatically change the way they live and work.  On the front lines, we found sometimes inconsistent and missing data, emissions planning to be heavily influenced by a self-selected group of highly motivated environmentalists, and local politicians who face a dilemma between their desire to address climate change and their desire to do the right thing for their community.  But the math remained uncomplicated.  Readers can down load the report I prepared for the local community here.

The Gunnison, Colorado community consists of three small towns, Gunnison, Crested Butte and Mount Crested Butte and a county government overseeing an area more than twice the size of Rhode Island but with a total population of only 14,000 and a density of less than 5 people per square mile.  The Gunnison community is geographically isolated and surrounded by mountains on all sides, making it easier to segregate energy consumption and CO2 emissions from those of other communities.  The population tends to be sensitive to environmental issues and our towns were among the relatively few to sign on to the US Conference of Mayors Climate Protection Agreement, to adopt 2020 CO2 emissions targets 20% below 2005 emissions, and to develop 2005 baseline greenhouse gas inventories and energy consumption estimates.  The latter provided critical data for my students and me to project a top-down estimate of future emissions based on the Kaya Identity, as used in Pielke’s analysis of Australian emissions targets.  Our results from three scenario projections were similar to those Pielke found; rates of decline for energy intensity and carbon intensity will have to double or triple during the 15 year period to meet a 20% by 2020 CO2 emissions target.  While Pielke’s bottom-up analysis for Australia used the number of new nuclear power plants to provide policy makers a metric for understanding the scope of change required, we focused on the things that happen on the front lines; energy conservation in buildings, improved transportation efficiency, a moderate transition to lower carbon fuels, and a host of every day, small decisions about energy use.

We developed a simple model of Gunnison’s energy consumption and CO2 emissions with three bottom-up scenarios matching the population and economic growth parameters of the three top-down scenarios.  The most likely scenario, with a 1.5% annual increase in population and a 1.5% annual increase in real economic growth, illustrates the somewhat shocking changes required on the front lines to achieve Gunnison’s emissions target.  By 2020, 58% of all buildings will have to undergo conservation improvements that improve efficiency by 40%.  By 2020 new buildings will have to use 57% less energy that the average building in 2005.  The overall building efficiency will have improved by 42%, some of which will come from a 1% per year efficiency improvement in every building as we switch to fluorescent lights, caulk and seal, etc.  Colorado requires that 30% of electrical generation come from carbon free sources by 2020, so this scenario keeps hydroelectric power at 15%, the 2005 portion of total electricity, while increasing electricity by wind power from 1% in 2005 to 16% of total electric power in 2020.

Transportation is a major energy consumer in this community (61% of Btus and 48% of CO2) because the economy is heavily dependent on tourism.  The transportation component of this scenario shows an increase in average vehicle fuel efficiency from 18 mpg in 2005 to 29 mpg in 2020 as current CAFE standards for new vehicles take effect.  While the number of vehicles increases by 41%, total vehicle miles increases by only 25% and the average annual miles per vehicle drops by 1% per year.  Under this scenario, energy intensity declines at -4.1% per year while carbon intensity declines by only -0.31% per year to achieve the 2020 emissions target.

My students and I came to rely on a swimming metaphor to describe the degree of change required to achieve emissions targets.  Without population and economic growth, the challenge is like swimming across a mill pond but with growth the challenge is like swimming up stream against a river’s current.  So, for example, under another scenario with a 2% population growth and 2.25% economic growth, the number of buildings requiring a 40% efficiency improvement grows from 58% of all buildings to 81% of all buildings (once CAFE and carbon free electrical generation requirements are met, improvements in building efficiency and a reduction in miles driven are the major remaining options for this community).  Finally, the report compares actual electricity consumption from 2005 to 2009 with projected consumption under the most likely scenario and shows the Gunnison community to be well off track to meet its CO2 emissions goal.  No one who has seen the poor housing stock in the Gunnison community, who has observed the reliance on pickups and SUVs for travel in this isolated and dispersed community, who earns the low average salary that makes a substantial investment in energy efficiency difficult, or who expects population and economic growth should have any illusions about achieving a 20% reduction in CO2 emissions from 2005 to 2020.
Posted by Roger Pielke, Jr. at 8/06/2010 01:08:00 PM
Email ThisBlogThis!Share to TwitterShare to FacebookShare to Pinterest
Newer Post Older Post Home