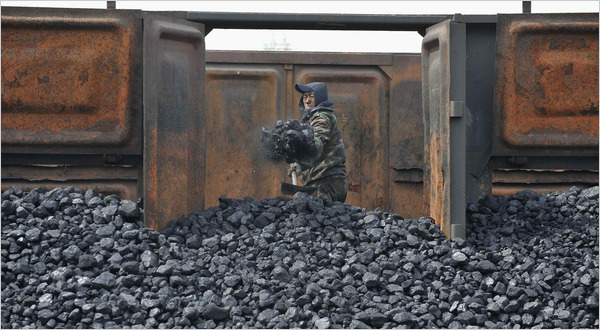 In today's NYT, Keith Bradsher has an interesting and sobering article about China's coal consumption. Here is an excerpt:

The nation’s ravenous appetite for fossil fuels is driven by China’s shifting economic base — away from light export industries like garment and shoe production and toward energy-intensive heavy industries like steel and cement manufacturing for cars and construction for the domestic market.

Almost all urban households in China now have a washing machine, a refrigerator and an air-conditioner, according to government statistics. Rural ownership of appliances is now soaring as well because of new government subsidies for their purchase since late 2008.

Car ownership is rising rapidly in the cities, while bicycle ownership is actually falling in rural areas as more families buy motorcycles and light trucks.

General Motors announced on Thursday that its sales in China rose 41 percent in April from a year earlier, virtually all of the vehicles made in China because of high import taxes.

Zhou Xi’an, a National Energy Administration official, said in a statement last month that fossil fuel consumption was likely to increase further in the second quarter of this year because of rising car ownership, diesel use in the increasingly mechanized agricultural sector and extra jet fuel consumption for travelers to the Shanghai Expo.

The shift in the composition of China’s economic output is overwhelming the effects of China’s rapid expansion of renewable energy and its existing energy conservation program, energy experts said.

Complicating energy efficiency calculations is the fact that China’s National Bureau of Statistics has begun a comprehensive revision of all of the country’s energy statistics for the last 10 years, restating them with more of the details commonly available in other countries’ data. Western experts also expect the revision to show that China has been using even more energy and releasing even more greenhouse gases than previously thought.

Revising the data now runs the risk that other countries will distrust the results and demand greater international monitoring of any future pledges by China. If the National Bureau of Statistics revises up the 2005 data more than recent data, for example, then China might appear to have met its target at the end of this year for a 20 percent improvement in energy efficiency.

China’s recent embrace of renewable energy has done little so far to slow the rise in emissions from the burning of fossil fuels.

Wind energy effectively doubled in this year’s first quarter compared with a year earlier, as China has emerged as the world’s largest manufacturer and installer of wind turbines. But wind still accounts for just 2 percent of China’s electricity capacity — and only 1 percent of actual output, because the wind does not blow all the time.

The article also included a statement from Rajendra Pachauri, head of the IPCC, who seems to be in complete denial about what is actually going on in China:

Rajendra K. Pachauri, the chairman of the Intergovernmental Panel on Climate Change, a United Nations research unit, said in an e-mail message that he believed China was serious about addressing its emissions.

“There is a growing realization within Chinese society that major reductions in greenhouse gas emissions would be of overall benefit to China,” he wrote after learning of the latest Chinese energy statistics. “This is important not only for global reasons, because China is now responsible for the highest emissions of greenhouse gases, but also because its per capita emissions are increasing at a rapid rate.”

The article is accompanied by the following graphic, which pretty much tells the story itself: