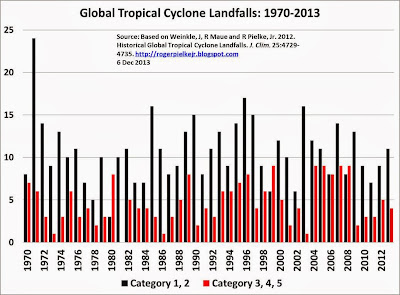 Last year Jessica Weinkle, Ryan Maue and I published a paper in the Journal of Climate on trends in global landfalling hurricanes (the paper and data can be found here). At the global level, our paper concludes that the data is good from 1970. Our analysis went through 2010.

With 2013 almost in the books I asked Ryan if he could provide a preliminary tabulation of the 2013 data (note that the data could be revised from these initial estimates, and 2013 is still not quite over).

At the top of this post is the dataset from 1970 first presented in our paper, updated using the same methods through 2013 (remember that there are a few weeks left in the year). In short, 2013 is an average year with 15 total landfalls (15.4 is average) of which 5 characterized as major (4.7 is the average).

Here are some updated statistics summarized from the data: 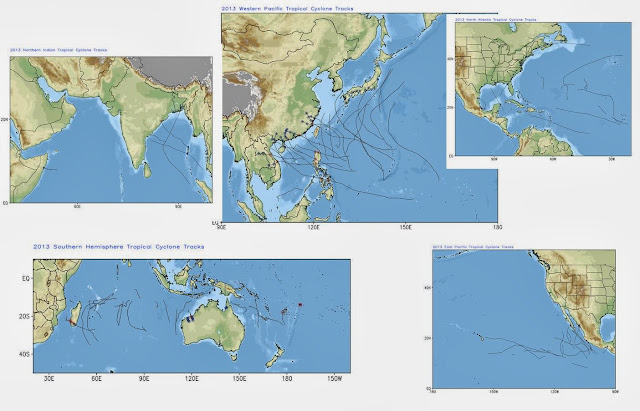 For those interested in the details, here from Ryan are the preliminary details for 2013 to date:

1. We are not finished with 2013.  This is calendar year only.
2. Tracks outside of NHC responsibility are not best-tracks or post-storm reanalysis but real-time ATCF.  NHC has mostly finalized their East Pac & NATL tracks, however.
3. All intensity values are 1-minute maximum sustained wind which is used by NHC and JTWC, the source of our historical TC dataset (and this one).
4. Actual instantaneous landfall intensity is unknowable.

Lots more great data and graphs, including the one below on total global tropical cyclone activity (not just those that make landfall) at his website here.
Posted by Roger Pielke, Jr. at 12/06/2013 01:58:00 PM
Email ThisBlogThis!Share to TwitterShare to FacebookShare to Pinterest
Newer Post Older Post Home